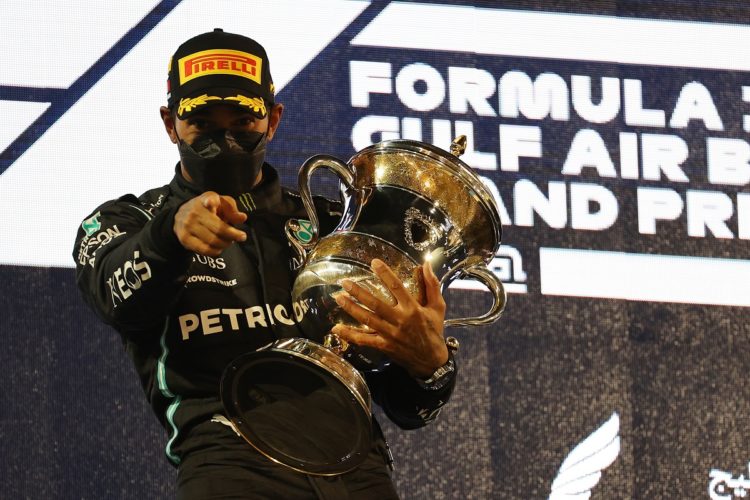 Mercedes’ Lewis Hamilton has won the opening race of the 2021 season in Bahrain, producing an eye-catching defence on Max Verstappen to take the victory.

Both drivers committed to two-stop strategies at the Sakhir Circuit, and were running on the Hard tyre as the laps trickled down.

Hamilton, who made his final pit stop on lap 28, ten laps before Verstappen, had an advantage of seven seconds when the Red Bull driver took his final stop.

Verstappen hunted the seven-time World Champion down and overtook him with four laps to go, but was forced to return the position as he went off the track at Turn 4 to complete the move.

Despite his best efforts, Verstappen couldn’t pass Hamilton for a second time and crossed the line just over seven-tenths of a second behind the Mercedes driver.

Valtteri Bottas picked up the final podium spot, with his chances of victory ruined by a slow 10-second pit stop midway through the event.

McLaren began its defence of third in the Constructors’ standings in strong fashion, as Lando Norris eased to fourth place for the papaya-livered team.

The Briton moved past team-mate Daniel Ricciardo on the opening lap of the race before getting past Pierre Gasly and Charles Leclerc early on for fourth, where he remained until the chequered flag.

Sergio Perez recovered to fifth place after a difficult qualifying, but suffered an early scare as his car stopped dead on the circuit on the formation lap. After firing it back up again, Perez started from the pit lane and progressed through the field during the 56-lap race.

AlphaTauri’s Yuki Tsunoda emerged as a star from the Bahrain race, as he picked up two Championship points on his debut with the team. After missing out on Q3 on Saturday, the Japanese driver was in the hunt for a top ten for much of the race, producing a last lap overtake on Lance Stroll to take ninth.

With Stroll taking 10th, there was misery for his team-mate Sebastian Vettel, who after being eliminated in Q1 on Saturday, clashed with Esteban Ocon on lap 45 – he was handed a 10-second time penalty and two penalty points as a result.

However he wasn’t the only driver in the wars, as Haas rookie Nikita Mazepin spun into the barriers on the opening lap, which triggered an early safety car. His team-mate and fellow debutant Mick Schumacher drove alone at the rear of the field for the rest of the race.

This article will be updated.