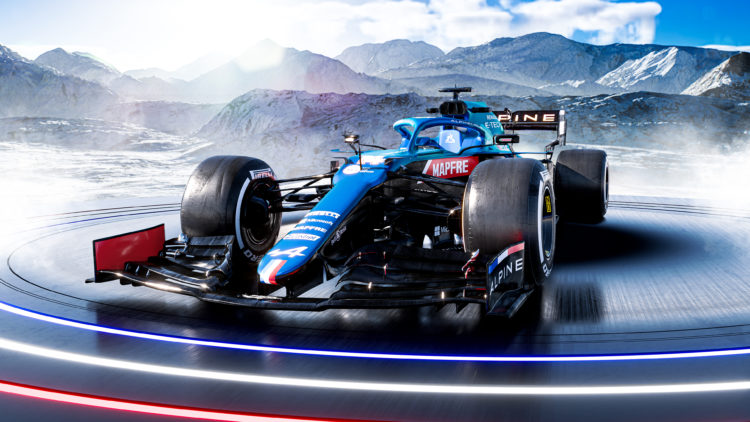 Alpine has outlined its ambitions to emerge as a front-running force in Formula 1 when new regulations are introduced. But it is not alone. Can Alpine really fulfil its lofty ambitions? MotorsportWeek.com takes a look at Alpine’s 2021 launch.

Renault has had a strong history in Formula 1 as a works team and engine supplier but in the hybrid era its success proved to be limited. Its relationship with Red Bull deteriorated and eventually disintegrated while upon its full-scale return it made gains but remained rooted in the midfield contingent. It finished a high of fourth, in 2018, and took five years to score a podium, a feat it eventually achieved three times. Moderate achievements, but not outstanding, and nowhere near the heights of 2005/06 – when it won championships, a situation it aspires to replicate.

Renault’s name will still be around as engine supplier but the entity is now known as Alpine, in deference to the ‘avant-garde’ arm of Groupe Renault that is being revitalised under its new strategic direction.

“It is obvious that it’s a transition year for everyone in fact,” said Alpine CEO Laurent Rossi on 2021. That should not be a surprise. Alpine, as Renault, spent much of 2020 scrapping with McLaren, Racing Point (now Aston Martin), Ferrari and AlphaTauri for the honour of being best of the rest. All of those teams, as well as the backmarker trio, are eyeing 2022 as the golden ticket to revitalise their long-term ambitions.

“Alpine is here to stay… we want to tackle the new era with high ambitions and we decisively designed our processes, our team, in order to first compete for podiums in the mid-term, and then in the longer run compete for victories, and not just races, but also the championship, the drivers’, and the title of the Constructors’ championship. By the end of the era, this is what we want to accomplish. We don’t enter the field with the hope of doing well, we enter the field with the hope of winning.”

But talking is easy, walking is difficult – what is Alpine doing to try and achieve its goals?

It’s a striking new look, new car nomenclature and new sign above the door at Team Enstone – an outfit which is used to stitching new names on its team gear. But it also has a refreshed management set-up as it heads into its new phase.

Cyril Abiteboul has exited without much fanfare and Alpine subsequently caused a stir by recruiting Davide Brivio to be its Racing Director, complementing Executive Director Marcin Budkowski. Brivio has a distinguished career in MotoGP, most prominently with Yamaha, Valentino Rossi, and more recently with Suzuki. The Japanese marque built a reputation for being a slick-run operation that defied its relative size and underdog mentality to emerge as a title-winning force – bringing Brivio to the attention of new Groupe Renault CEO Luca de Meo. The pair had previous association in the late 2000s when De Meo was the CEO of Yamaha’s title sponsor Fiat.

“Basically our job as a race team is to exploit the full potential of the car,” said Brivio. “It’s a big pressure and a big responsibility because we have over 1000 people between Enstone and Viry.

“Of course I’m not an engineer but I have to make sure that the engineers, the drivers, all the people involved, they have all they need to perform at the very best. In this way, if we are able to have a strong team – which is already in place – we will be able to extract the full potential of the car.”

Brivio will be one piece of the jigsaw – with Budkowski slotting in alongside.

“We have a new structure, we’re lucky that with the Alpine project we’re really part of the Renault Group strategy now,” said Budkowski. “That’s a stability going forward that is great for the team, it’s also something that we want to build on for the future. So irrespective of yes there’s been an upheaval, but yes there’s new colours, it’s a new dynamic, there’s new energy in the project and we’re looking forward to it.”

The looming presence of ‘22

It is only March 2021 but already Formula 1 teams are looking to March 2022, when the new regulations will be felt at a grand prix for the first time. Each team has to grapple split car developments, doing so with amended windtunnel and CFD allocations, while also becoming accustomed to the cost cap – not to mention the ongoing pandemic.

“We’re used to juggling several car programmes, usually two car programmes,” said Budkowski. “The difference this year is the 2022 changes are nothing less than a revolution. I’m going to celebrate might 20 years in the sport in April and I’ve never seen such a big upheaval of regulations.

“It’s a completely new ballgame and therefore it puts even more emphasis on starting early and getting the initial concept right.

“This year it makes it even more difficult if you like because we want to develop this car, we want to go into the championship and fight for good positions and fight for a good championship position, at the same time transitioning early is important. For us, the cost cap is a very small impact at the moment so actually that didn’t come in play, but it will come in play for the next seasons.

“Covid hit, I think it was the right decision to delay these regulations, even if we were quite keen on having them from this year because they are an opportunity for us, it’s a bit of a reset. Now we’ve accepted it because it was the right thing to do for the sport and it was the reasonable thing to do.”

Return of the champion

Team Enstone has been affiliated with several iconic drivers during its time in Formula 1, stretching back to the emergence of Ayrton Senna in the mid-1980s with Toleman, and titles with Michael Schumacher in the mid-1990s as Benetton. But it is its mid-2000s hero who has returned for a third spell and, ostensibly, his final shot at achieving an elusive third world title.

Fernando Alonso quit McLaren at the end of 2018, largely disillusioned as a sport he chastised as predictable, and instead turned his focus elsewhere. Victory at the Indianapolis 500 has remained elusive but Alonso, now 39, has parked his triple crown ambitions for the time being to return to Formula 1. It is 20 years since Alonso debuted, 15 since his last title, and eight since he even won a grand prix – but he maintains he is still at the top of his game and fully motivated.

“I became a more complete driver,” said Alonso on his two years out of Formula 1, during which he raced WEC, IndyCar, Daytona and the Dakar. “You constantly learn when you push yourself to new limits and when you are out of your comfort zone. Without a doubt, I’m a more competent driver now than two years ago. [But] I want to improve even more as a driver. I took a lot of learnings from the last two years away from the sport, and I want to consolidate these and apply them in F1. For example, different philosophies of racing, driving techniques and approaches to work ethic.”

Alonso has already relished the 2022 reset, stating he hopes “the new cars make the sport better and more unpredictable” but dismissed suggestions that 2021 is a write-off.

“Putting it simply, no,” he said on whether he was concentrating more on 2022. “As soon as there is competition, a race weekend, a qualifying lap, a race start, and a championship to fight for, your focus is in that moment and you have to deliver there and then.”

Amid high-profile moves, such as Alonso’s return, Sebastian Vettel’s switch to Aston Martin, and Daniel Ricciardo’s transition to McLaren, it is easy to overlook the presence of Esteban Ocon at Alpine. Once regarded as a potential future front-runner Ocon’s star has waned in recent years. Mercedes preferred Valtteri Bottas to Ocon while after securing a Renault seat, following a year on the side-lines, the Frenchman frequently found himself trailing Ricciardo. Ocon could not eclipse Ricciardo on a Saturday, which left him on the back foot for Sunday, scoring 62 points to Ricciardo’s 119 – a subdued return given Ricciardo had already decided to leave for pastures new before 2020 even began. But there were green shoots for Ocon. His points deficit was exaggerated by bearing the brunt of Renault’s reliability issues while a storming drive to second in Bahrain – his first podium – acted as a huge confidence booster for the winter. It came after some soul-searching through 2020 about what was going wrong.

“[I want to] start on the level I finished 2020, that’s the first thing,” said Ocon. “Then build on from there, keep progressing, keep learning things with the team and understanding the car and go from there. I definitively don’t want to be at the level I was early in 2020 and build up basically from where I finished.

“We had three podiums last year, that were good, solid podium finishes for the team, and of course we want more of those again, to taste that feeling, but until we put the car down, in Bahrain, we’re not going to know where we stand exactly, so that’s the question.”

Alpine’s boss is a rarity among his peers – he is used to winning and has recent championship success. But, as with several of Alpine’s rivals, there is optimism tempered with caution.

“Of course we want to win, everybody in the team wants to win,” said Brivio. “We have to be realistic. Last year we did three podiums, so we started to get close to the top positions and that’s where we have to start from.

“This year is kind of a special year because everybody is looking towards 2022, the new regulations and new cars which is under development. So this is a kind of preparation year where we hope in 2022 to improve even more our competitiveness, but the winning is always in our target.”