Ducati 2020 MotoGP review: The end of an era 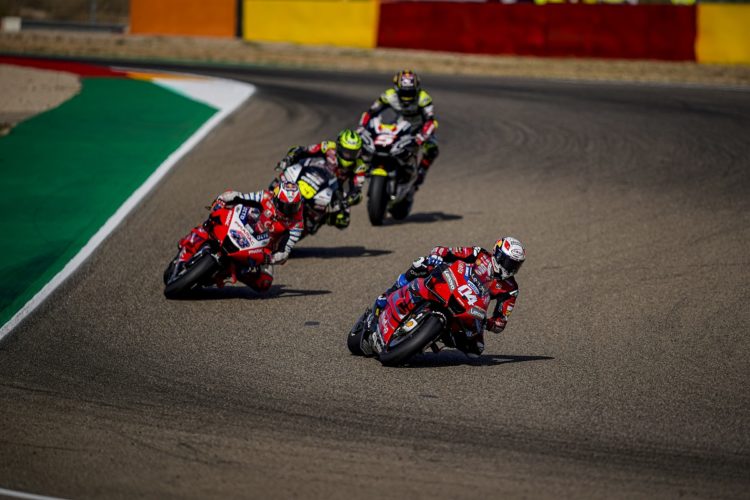 In the final edition of the 2020 MotoGP season review, Motorsport Week reflect on a turbulent campaign for Ducati symbolised by the end of an era with long-time pilot Andrea Dovizioso, while ultimately culminating in a seemingly unlikely title success.

With Marc Marquez missing pretty much the entirety of the 2020 MotoGP season after breaking his arm in a crash during the season opening Spanish Grand Prix, three-time premier class runner-up of the past three seasons-Dovizioso-immediately became one of the favourites for a maiden title.

The Ducati racer enjoyed several thrilling battles with Marquez across those campaigns, though he and the Desmosedici ultimately lacked the consistent speed and results of the Honda man to wrestle away the title.

What should have been a relatively easy march to the championship-especially considering the lack of consistency put on display by most of the ’20 class across the year-ultimately became a messy year of divorce and lack of speed, particularly for the factory Ducati squad.

A change to the construction of Michelin’s rear tyre played against the strengths of the Desmosedici, with all its riders complaining of reduced braking stability in particular as a result of the change, something that affected its rival manufacturers minimally.

Despite this Dovizioso still started the year on the podium in the first round at Jerez with third, though could only bag sixth the following week at the same venue.

Ducati’s GP20’s struggled as a collective at Brno-a worrying sign considering the brand’s past success at the Czech circuit-although well and truly came back to the fore at its traditional stomping ground-the Red Bull Ring in Austria.

A quick mention at this point needs to go to Johann Zarco though, the Frenchman managing to put his Avintia-run GP19 machine on pole at Brno before racing to the Spanish team’s first ever podium finish on Sunday, taking third despite having to serve a long-lap penalty.

Shortly after qualifying for the Austrian race Dovizioso announced that he would not return to race in red for ’21 following 18 months of increasing animosity between the two parties, the Italian frustrated with the lack of progress from Ducati regarding the Desmosedici’s mid-corner turning weaknesses, while the Bologna-based marque reckoned Dovizioso hadn’t done enough to take the title battle to Marquez.

Dovizioso’s decision meant Ducati’s factory outfit would be running an all-new line-up for the following season after electing to replace Danilo Petrucci with Jack Miller following the ’19 Italian GP winner’s slump in form towards the end of that year-with the other Pramac rider of Francesco Bagnaia ultimately capturing Dovizioso’s berth.

With the paddock still reeling from Dovizioso’s decision to leave Ducati after seven years, he brought his classic best to score an emphatic victory just 24 hours after making his course of action public, heading Suzuki’s Joan Mir and Pramac’s Miller by less than two seconds.

Little did we know it at the time, but Dovizioso’s Austria success would not only be his last victory with Ducati, but also his last rostrum after its underlying pace problems failed to improve throughout the year.

In what was a bizarre twist, all four of Ducati’s GP20 challengers seemed to hit purple patches of form at different parts of the year, culminating in a result that seemed impossible as the season flashed past the mid-way point.

Bagnaia had missed three races after fracturing his knee during opening practice for the Czech GP, but on return at Misano stunned his rivals with his speed on his way to a debut premier class rostrum with second behind Fabio Quartararo.

He then looked to go one better just seven days later at Misano once again, leading the way with just seven laps to go-albeit under siege from a charging Maverick Vinales’ Yamaha-though disaster would strike as he tucked the front of his Pramac machine after running over a errant tear-off at the awkward Turn 6 left-hander.

Bagnaia’s form would mystifyingly disappear across the remaining eight races, the ’18 Moto2 world champion picking up five DNF’s and only one further top ten on his way to a lowly 16th in the riders standings.

Petrucci meanwhile proved Ducati’s decision to replace him for ’21 after suffering a largely dismal final year with the manufacturer, his only bright spot coming at a soaked Le Mans as he mastered the difficult conditions to record a second career victory.

Aside from this he managed a best result of just seventh on his way to 12th overall, just a point clear of Zarco on a year-old bike run by an Avintia team with significantly less funding available to it.

Dovizioso was at least able to remain part of the championship conversation thanks to his customary consistency across the rest of the campaign, though his inherent lack of pace ultimately meant his title hopes died after Mir wrapped the title up with a round to spare at Valencia-ending the year a distant fourth level on points with KTM’s Pol Espargaro.

Miller meanwhile came into his own hot streak as the season reached its climax, the Aussie narrowly missing out on a first win of the year following a tight battle with Franco Morbidelli in the second Valencia contest, before getting his own back on the Petronas SRT racer in the season finale at Portimao as he snatched second with just a handful of corners remaining.

His strong end to the year saw him take seventh overall level on points with sixth placed Vinales-the Spaniard getting the nod to seventh thanks to his Misano victory-and just three points down on Dovizioso.

Despite Ducati missing out on the riders title it so craved, it at least-helped in some part by Yamaha’s 50 point penalty for running illegal engines in the Spanish GP as well as Suzuki’s disastrous Portuguese outing-secured its first manufacturers championship since 2007, bringing a ray of light at the end of what was a largely frustrating campaign in which all three accolades went begging.

The ’20 season was certainly not the way anyone wanted the Dovizioso-Ducati swan-song to play out, the 15-time MotoGP winner finally grabbing the title and riding off into the sunset after three successive vice-champion results was a very real possibility early on after all.

Time will tell as to whether Ducati will come to regret losing its star rider, but for now it has selected youth to carry its hopes into the future with the 23 and 25 year old Bagnaia and Miller respectively, while Zarco and Moto2 graduate Jorge Martin will be keen to make their mark as they take to the ’21 starting grid with Pramac.