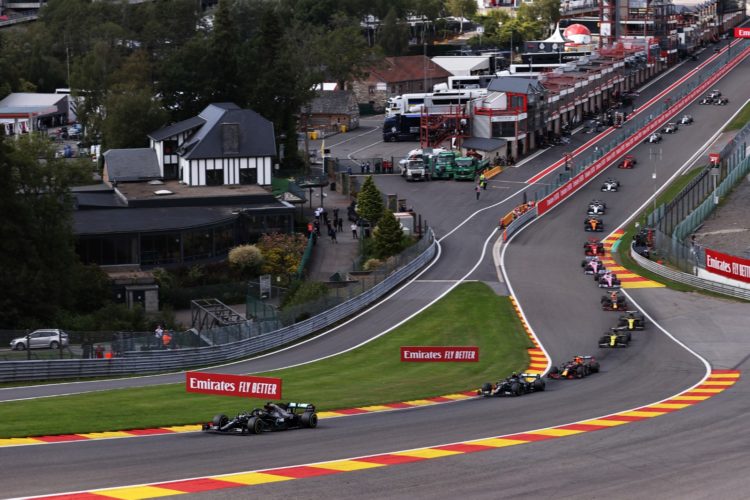 It’s been a wild ride – wilder than anyone surely expected. But what happened in Formula 1 in 2020? Here’s what.

The season began in Australia, as all the adverts in Melbourne proclaimed. And then nearly ended there too. In the early hours of Friday, the event was called off, the paddock was dismantled, and everyone returned to Europe awaiting the next step. F1 turned 70 and its global nature heightened its vulnerability to the pandemic. With real life on pause the world switched off and turned on, going from zooming to Zooming, streaming, gaming, Twitching. We had an Arsenal striker at McLaren, the Despacito guy at Racing Point, some took it seriously, others just crashed, and George Russell, sorry, GEORRRRRRGE, won something. Charles Leclerc dressed as a banana, and locked out his girlfriend, Lando Norris shaved his head, and Nicholas Latifi spent months as an F1 driver without having driven in F1. While there was gaming there was also productivity. F1 stopped work on cars and engines, instead focusing on breathing aids and ventilators, doing its part for the push against the pandemic, with Project Pitlane highlighting the strengths of the sport.

Lewis Hamilton took the knee, raised the fist, said her name, and proved himself a champion off-track as well as on-track. He won races he shouldn’t have done, he won races at a canter, and he even won with only three wheels on the wagon. He made the sublime look simple, claiming the crown of the GOAT, though the nuances and discussions will continue forever. Valtteri Bottas won the first race, promising a title challenge, then won once more. True, there was crushing misfortune, but also crushing inevitability of how the season unfolded. Once the title was lost it was like watching a tennis player unable to serve or a striker missing an open goal. George Russell, sorry, GEORRRRRRRGE, provided a glimpse of the future on his cameo. The Silver Arrows became the Black Panthers, sweeping up for a magnificent seventh, and surely odds-on already for an eighth wonder in 2021.

It was rinse and repeat at Red Bull. The increasingly sardonic Max Verstappen hung on as the third amigo up front, validating his status as the most likely pretender to Hamilton’s crown, as he sent it where he could, bagged the trophies where he couldn’t, and endured an awful trio of trips to Italy. Alexander Albon was largely a midfielder not a front-runner – they raced him so hard – in a car that was often around the AlphaTauris not the sister Red Bull. Well, look, Pierre Gasly would have done worse, right? The much-vaunted chassis was so-so, the engine made gains, but after leaping from chronic embarrassment to front-running power the corporates shelved the journey before it peaked. A pole/win double eventually came – right at the end.

Ferrari reached a settlement with the FIA over its 2019 engine, an agreement that stung the paddock and was likely to lead to war until the pandemic overtook it. Ferrari maintained its virtue all while its cars were weak in a straight line, like watching a dog feign innocence while surrounded by shredded furniture. Ferrari at least celebrated its 1000th race at is magnificent Mugello circuit though it came amidst the depth of its dire dip. It commemorated the achievement with a special livery but while it dressed its car with lipstick a pig in make-up still oinks. Charles Leclerc tried to defy physics and proved himself worthy of his anointment as Ferrari’s next leader. Sebastian Vettel’s Ferrari chapter concluded with a farewell tour that was endured not enjoyed, spinning into the record books, the grazie ragazzi era ending without fanfare. It won no races in a year where both Racing Point and AlphaTauri managed one. It was humiliated and humbled.

McLaren kept hold of everyone’s favourite siblings, who got away with what they could when not being watched by everyone’s favourite hipster science teacher. Lando Norris’ lap of his life netted a podium, a bone-crushing hug from Zak Brown, and everlasting love on the Internet. An eye-rolling Carlos Sainz had to repeat 1000 times that he had no regrets over signing for Ferrari and was largely solid, mega at Monza, and dire at Sochi, where he inexplicably drove into a wall. McLaren finished third despite not often having the third-fastest car – Team Papaya taking bronze.

Racing Point definitely didn’t copy Mercedes (breaks fourth wall with suggestive glance) but its RP20 earned it the nickname Tracing Point as most of the midfield hurled insults and insinuations left, right and centre. Renault lodged a protest, Racing Point said it was fine, released a clip of its owner that resembled a hostage video, but Racing Point’s version was deemed a mistruth, and a points sanction came its way. The Pink Panthers usually had the third-best car but finished fourth, some setbacks self-inflicted, others just plain unlucky. Everyone’s favourite Mexican thrived, finally claimed a well-deserved win, and a seat at a race-winning team. Lance Stroll continued to be an enigma, rubbishing the naysayers who unfairly malign him for his wealth and privilige, while also still being a bit crap on occasion.

Renault entered year two with dental ambassador Daniel Ricciardo knowing the sequel wouldn’t turn into a threequel but assured by the growing spectre of the returning Fernando Alonso. An off-the-cuff remark about a tattoo turned into a long-running saga that culminated with the long-awaited podium at the Nürburgring. Then Ricciardo scored another podium at Imola. Then Esteban Ocon turned bronze into silver in Bahrain, but no-one really noticed. Podiums, an upward trajectory, and a rebrand into *checks notes* Alpine.

Red Bull finally made Toro Rosso cool by giving it a funky name that when mispronounced brought to mind a macho version of Britain’s Prime Minister. AlphaTauri handed long-lost Bond villain Franz Tost (who?) groovy uncle clothes while Pierre Gasly, a punchbag for most of 2019, became the master of Monza, showing that good guys do win. Dany Kvyat spent much of the year waiting for the axe to swing. Hired, promoted, demoted, fired, re-recruited, retained, and fired, all before he’s 27.

Alfa Romeo was there. Apparently. It finished eighth, as it did in 2018, and as it did in 2019, but rarely troubled the points. Kimi Raikkonen made everyone look silly for a lap in Portugal and greeted everything (even that) with expected indifference. It was what it was, and will be what it will be, until it isn’t what it isn’t. Perfume advert star Antonio Giovinazzi rocked the paddock’s best hair.

Haas was also there – a good aspect, given its financial worries and rumoured ambivalence of its team owner. Its car was undeveloped and unloved, as it started badly and got worse. Romain Grosjean was often the butt of jokes but became the hero of the year, rising like a phoenix from the inferno of his halved car, which ripped through the barriers like a missile. The tower of flames shocked the paddock, stunned the world, and made Grosjean a household name. It was F1’s Great Escape, as Grosjean leapt over the burning barriers to begin his second life. Marion has her husband; Simon, Sacha and Camille have their father.

After 40 years of fierce independence, incredible moments and everlasting memories the Williams family flew the financial white flag and sold up to a group of investors. Sir Frank and Claire bade farewell, with Claire given a goodbye gift of a front wing at Monza, which must have been a nightmare at airport check-in. George Russell, sorry, GEORRRRRRRGE, was sensational on a Saturday and stellar still on Sunday – just don’t mention Imola. Nicholas Latifi politely got on with the job. Williams finished without a point for the first time but the progress was tangible.

There were also some cameos. Monaco-based TV pundit Nico Hulkenberg made some appearances, though not on the podium, as did social media star Jack Aitken while the Fittipaldi name returned, bringing with it the Brazilian flag. F1 dodged a bullet in Mugello, cannoning and crumpled cars littering the pit straight, Chase Carey waved farewell, as did Grosjean and Kevin Magnussen, ousted for the F2 king and joker. There was We Race As One, the future addition of Saudi Arabia, the disappearance of Vietnam, the cost-cutting, the deferred regs – and more importantly a proper season, something which looked impossible back in March. It was a season of the expected and the unexpected. Here’s to 2021.