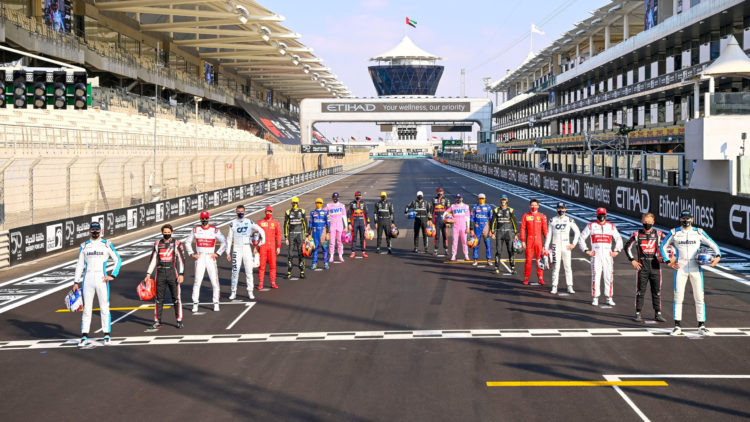 Motorsport Monday presents its top ten Formula 1 drivers of the 2020 season – not an easy task when 13 drivers stood atop the podium, five of which recorded race wins – two of which came as a major surprise – and the racing was, overall, strong up and down the grid!

With Mercedes facing little threat from other teams in 2020, it was quickly apparent that the Drivers’ Championship fight would come down between Hamilton and Bottas. However, Bottas’ biggest challenge that he could pose to Hamilton came in qualifying, as Hamilton had control in the races to take his biggest ever Championship-winning margin at the end of the year. Bottas did a satisfactory job for Mercedes, with Hamilton leading the charge, but he’ll want to quickly forget races such as Portimao, Turkey and Sakhir as he prepares for another challenge in 2021. He’ll have to start strongly, and maintain that form, else the pressure for Mercedes to look elsewhere will intensify.

As a sophomore campaign this was solid, occasionally spectacular, and sometimes anonymous, from Lando Norris. The young Briton put in the lap of his career, deploying Scenario 7, to claim a shock podium in Austria and was also superb in the Abu Dhabi finale, his smooth qualifying lap within a few tenths of pole position. He narrowly edged Carlos Sainz in the one-lap battle and was firmly in the midfield battle in the points table too. Elsewhere there were some performances where he went missing but for a driver only in his second season it was an encouraging year. Nonetheless 2021 is likely be career-defining given the impending arrival of Daniel Ricciardo.

Russell was once again forced to race towards the back of the grid this year but Williams’ improved pace enabled him to show his ability – making Q2 on nine occasions as his qualifying prowess was emphasised. A big break was delivered his way when he stepped into Mercedes to replace Lewis Hamilton in Bahrain and after narrowly missing out on pole position, Russell was on course for his maiden race win before the perilous racing gods intervened on multiple occasions. Nevertheless, the message was sent to Mercedes, loud and clear –the 22-year-old Briton was capable of handling himself at the front of the grid, leaving the team in a sticky situation when evaluating its driver line-up going forward.

Sainz headed into the delayed 2020 campaign safe in the knowledge his future, through 2022, was settled, but before he donned the red overalls there was still a final flourish in papaya and blue. Sainz was largely excellent, continuing the good form from 2019, and was desperately unfortunate not to pick up a bigger haul of points. Pit stop woe in Austria – having qualified a stunning third – was followed by a costly tyre failure at Silverstone and an inability to even start in Belgium. He was superb at Monza, taking second, a result which was likely even before Lewis Hamilton dropped out of front-running contention. Aside from a rookie error at Sochi he capped the season strongly, including race-leading cameo at Portimao, to surge to a well-deserved sixth overall, having been outside the top 10 as recently as mid-October.

Gasly’s horror story that played out during the first half of the 2019 season with Red Bull is now seemingly long forgotten. The Frenchman had started to redeem himself with strong performances at Toro Rosso following his demotion last year, however no result came close to eclipsing his maiden victory that came at Monza for AlphaTauri. Withstanding the pressure from a closing Carlos Sainz behind, Gasly closed out the win to reaffirm why he made the jump to F1 – sending a strong message to those who lost faith during his stint at Red Bull. He was also exceptional at Portimao, taking fifth, and in qualifying at Imola.

For once Sergio Perez’s future was not going to be a talking point courtesy of his three-year deal – but then it was as Racing Point effectively sacked him. Perez had a slightly slow start, hamstrung by his Covid-19 diagnosis, but across the second half of the season he was utterly superb. Drive to fourth at Sochi, in the old-spec RP20, was outstanding while a podium should have followed at Imola save for the team’s baffling strategic call. Sensational performance in Turkey yielded a deserved podium and a cruel MGU-K failure in Bahrain not only robbed him of a podium but ended his season-long points streak. But that was almost forgotten with the drive of his career a week later, surging from last to first, to end his 190-race wait. After a bit of a messy and subdued start this was a 10/10 season from Mugello onwards and a Red Bull seat a suitable reward.

Before the 2020 season finally got underway Ricciardo already knew he would be saying farewell to Renault at the end of the campaign, having signed a deal with McLaren. Following a tough maiden season in yellow and black in 2019 matters improved for Ricciardo in his second year with the team. Strong drives at Silverstone, Spa and Mugello left him just off the podium and he finally made a long-awaited return to the top-three at the Nurburgring, and again at Imola. In a car that arguably wasn’t as quick as Racing Point, Ricciardo’s consistency saw him score points at the last 11 races of the year – the longest ongoing streak on the grid – in probably his strongest season to date.

Leclerc emerged as Ferrari’s future in 2019 and this year he rubber-stamped his status as team leader. In the recalcitrant and power-shy SF1000 there were some spectacular performances, the highlights being podiums in Austria and Britain, the achievements of which could only be fully appreciated once the depths of Ferrari’s travails were properly realised. In qualifying he was superb, somehow taking fifth at Mugello and fourth at the Nurburgring, Portimao and Sakhir. In race trim he fought with the midfield where he could, sometimes trying to defy physics, as the SF1000 tried to spit him into an accident. That aggression bit him at Monza, with a sizeable shunt, and he was careless in a handful of first-lap clashes, notably in Russia and Bahrain. But he undoubtedly indicated why Ferrari was so swift to tie him to a long-term deal.

As in the 2019 season Verstappen did the best he could with the car he had. Luck and reliability weren’t on his side, as he suffered five retirements, of which none were his fault. But in the races he did finish, it was almost always on the podium. A win at Silverstone came amid Mercedes’ tyre struggles before he ended the year on a high with victory in Abu Dhabi. However, more often than not, Verstappen was forced to settle to being second-best behind the dominant Mercedes. He was the only driver to worry the World Champions across the year, as team-mate Alexander Albon had little answer for the Dutchman’s pace.

Is this any surprise? Absolutely not. Lewis Hamilton was firm favourite for the 2020 title but the manner in which he equalled Michael Schumacher’s title record and beat the win tally was astonishing. Among the highlights were his Styrian pole lap in torrential rain, winning on three wheels at Silverstone, crushing his rivals in Belgium and of course the title-clinching drive from sixth at the grip-less Istanbul Park. He made the sublime look simple. Off-track he underlined his champion credentials with his push for equality, adding repeated actions to words, and remaining steadfastly defiant in the face of some criticism. He was the best driver, with the best car at the best team – and categorically pulverised the opposition.