The bittersweet timeline of the Vettel-Ferrari chapter 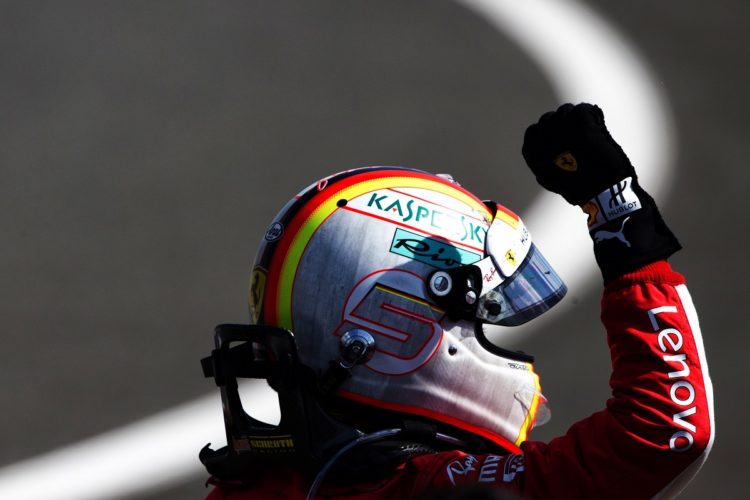 This weekend’s Abu Dhabi Grand Prix will mark the end of an era as Sebastian Vettel will make his 119th and final race entry with Ferrari, concluding a heterogeneous chapter than began in 2015.

Vettel’s ultimate goal of taking home a championship with the Maranello-based squad has failed, but the German still leaves behind a successful stint, firmly embedding himself into the history books of Formula 1’s most distinguished team.

Ferrari has proceeded with a changing of the guard following Charles Leclerc’s breath-taking rise, with Vettel forced to find pastures new after being ousted at a team that was formerly structured around him.

Following a torrid year at Red Bull in 2014, which came off the back of four consecutive world championships, Vettel detached himself from the brand and sought a new adventure, slotting in at Ferrari for the departing Fernando Alonso.

Ferrari too had endured a particularly difficult campaign in 2014, and given Mercedes’ sizeable advantage over the field at the end of F1’s maiden year in the turbo-hybrid era, there were little expectations of success ahead of 2015.

However, things started superbly for Vettel at Ferrari, as he took five podiums in the first six races, including his first win for the red team in Malaysia, further cementing the trust between Vettel and the notoriously ruthless but loyal Tifosi.

By mid-season, and after he had climbed onto the top step of the podium for a second time at the Hungarian Grand Prix, the German was already putting his name in the championship battle talks. He would win once more in 2015 in Singapore, where Mercedes was mysteriously off the pace, however the car simply didn’t have the pace to scuffle the Silver Arrows across the entire season.

After the successful inauguration, matters became more difficult for Ferrari in 2016. The momentum that it was hoping to carry over from the previous year failed to materialise, with Vettel unable to claim a race win throughout the year.

Podium finishes were also less frequent as Red Bull made a leap forward from the previous year. In the second half of the season, Vettel clambered into the top three on just two occasions, having had five podiums in the first half of the campaign.

At the Malaysian Grand Prix, he spun title contending Nico Rosberg around and retired from the race, while in Mexico, he infamously delivered a crude message to the FIA over the radio following an on-track altercation with Max Verstappen during the grand prix. It was a frustrating end to the year for Vettel – however, things would soon begin to appear brighter.

2017 saw the introduction of new technical regulations, with the cars lapping a number of seconds faster per lap due to the increase in downforce. Ferrari, it seemed, had got the switch up right, as Vettel won the opening round of the year, taking the championship lead for the first time since 2013.

Vettel would win two more races in the following five outings, as well as taking three second places, leaving him 25 points clear in the standings. However, things took a bizarre turn in Azerbaijan, where he clashed with Lewis Hamilton under a Safety Car period, after believing the Mercedes driver had brake checked him.

Things began to slow down for Vettel after that, with Hamilton starting to catch him in the standings, taking over the top spot after victory at Monza. It soon got worse for Vettel, who was involved in the iconic crash at the start of the Singapore Grand Prix that eliminated himself and team-mate Kimi Raikkonen from the race.

In Malaysia and Japan, reliability did Vettel no favours, allowing Hamilton to stretch his advantage in the title race to 59 points before he closed out his fourth championship in Mexico, joining level with Vettel on the number of titles.

The mood within Ferrari had shifted from the early years, as it was now determined to focus on the world championship, having not been in that position in the early years of Vettel’s arrival at the team.

Vettel started 2018 in strong fashion, winning the first two grands prix of the year, which will stand as the only time in his Ferrari career that he has won consecutive races.

The battle between Vettel and Hamilton was close in the early stages of the season, with Vettel winning twice again in Canada and Britain. Things were looking even better for him in Germany, as he was on course to win his home race for the second time in his career before he crashed out of the event from the lead.

Many point to the Hockenheim error as the beginning of Vettel’s downfall at Ferrari, despite claiming four podiums in the next five grands prix, including a win in Belgium. However, Hamilton had broken into a stride, and with Vettel having incidents that left him facing the wrong direction in Italy, Japan and the US, his title hopes collapsed.

Regardless, 2018 was one of Vettel’s most successful year with the Scuderia outfit, scoring 320 points, five race wins at 12 podiums – but no championship, the target he had in mind when walking through the Maranello gates at the end of 2014.

Ferrari was tipped to enter the 2019 campaign as the clear frontrunners following the times it displayed at pre-season testing, however it soon became apparent that that wasn’t the case, and it couldn’t pose a challenge to Mercedes like it had done over the previous two years.

Vettel also had to deal with the arrival of Charles Leclerc at the team, who settled in quickly and found his rhythm almost immediately, pulling off a telling overtake on Vettel in Bahrain and going on to lead the race before a power unit issue shuffled him back to third.

Vettel’s first real opportunity of a race win came at the Canadian Grand Prix, however he was denied the achievement after being handed a time penalty for forcing Hamilton off the track after he had re-joined the circuit from a mistake.

He displayed flashes of speed across the year at Germany and Russia, while Singapore saw him claim what is likely to be his final race win for Ferrari, albeit controversially after jumping Leclerc through strategy.

Matters deteriorated rapidly for Vettel in 2020, as Ferrari began the year with a car a long way off the pace, playing down its pace before Australia, which was eventually cancelled.

Pre-season Ferrari had indicated it was likely to retain Vettel but the pandemic prompted a re-think and it duly decided not to offer him a new contract, the machinations of which initially left Vettel unimpressed.

Just one podium has befallen Vettel so far this year, who is on course for his worst season finish since his Toro Rosso campaign of 2008 – a year in which he still managed to win a race.

Vettel returned to the podium in Turkey after a last corner overtake on Leclerc, but by the time it came around, the relationship between himself and Ferrari had become a whisper of what it once was.

Although he leaves the team with no championship and off the back of one his most disappointing seasons, Vettel’s place in Ferrari’s legacy is undisputed.

Only Michael Schumacher and Niki Lauda have taken more wins for Ferrari in the team’s history, while Vettel is joined second for the most number of podiums with the team on 55 – the same tally as Rubens Barrichello.

Throughout Ferrari’s long history, Vettel is the fourth most experienced driver with the team, with only Schumacher, Kimi Raikkonen and Felipe Massa having more grand prix starts as a Ferrari driver.

As he prepares to move to Aston Martin, it’s a sombre goodbye to Ferrari for Vettel – it closes out a partnership that undeniably once had all of the ingredients for success.