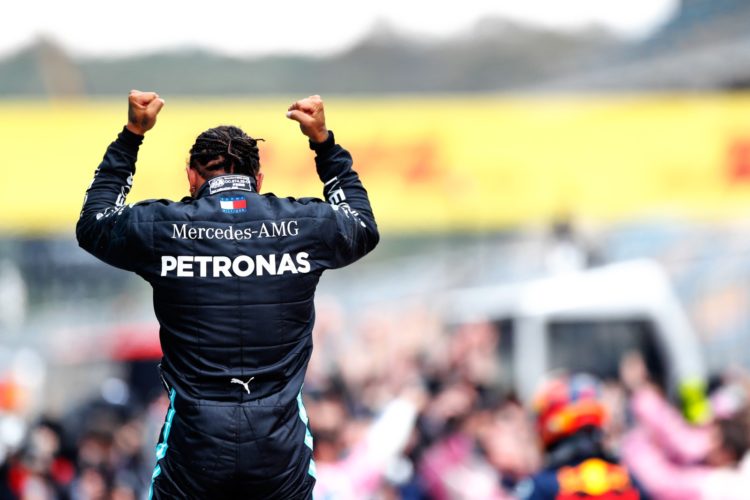 Lewis Hamilton swept to a record-equalling seventh Formula 1 world championship in a campaign delayed and reformed by the Covid-19 pandemic. MotorsportWeek.com takes a look at 10 crucial on-track moments that put Hamilton en route to the historic achievement.

Valtteri Bottas, as he did in 2019, claimed victory in the season-opening round while Hamilton was classified only fourth after a penalty for clashing with Alexander Albon. The Red Bull Ring has never been the happiest of hunting grounds for Hamilton but torrential rain for the Styrian repeat handed him his chance. Hamilton dominated the rain-hit qualifying session, judging the ever-changing conditions to perfection, as he finished 1.2 seconds clear of nearest rival Max Verstappen. Hamilton went on to cruise to victory to kick-start his 2020 campaign.

A shower pre-race in Budapest soaked the Hungaroring circuit and the opening laps were a voyage into the unknown for the field on Intermediates. Hamilton scorched away from pole position and after two laps had already gapped the field by a sizeable five seconds. As the pack gradually exchanged Intermediates for slicks Hamilton retained his position and by the time everyone was on dry tyres he was eight seconds clear in as many laps. Victory, plus fastest lap, gave Hamilton the points lead over a struggling Bottas.

Hamilton controlled proceedings at Silverstone but backed off in the closing stages after Bottas and McLaren’s Carlos Sainz suffered tyre failures, with Red Bull bringing in Verstappen for a precautionary pit stop. As he rounded Brooklands on the final lap Hamilton’s front-left tyre delaminated and he was faced with the ordeal of wrestling home his W11 with only three fully operational tyres. Hamilton managed to coax his car through the remaining half lap while ensuring Verstappen – at one stage half a minute adrift – did not overhaul his advantage. It was an astonishing piece of driving to cap a previously sedate race.

Not every stage of a world title is won in captivating or entrancing fashion – some of it is about doing what has to be done in straightforward fashion. The rearranged Spanish Grand Prix at perennial testing venue Barcelona was one of those occasions. Hamilton edged Bottas for pole position and preserved the advantage into Turn 1 as Verstappen split the Mercedes drivers. That was job done as Hamilton stretched into the distance and moved over a win clear of his rivals in terms of points after just six rounds.

Hamilton was poised to annihilate his opponents at Monza after building a 10-second lead in just 10 laps while Bottas struggled with a handling complaint following a disastrous first lap. But when the Safety Car was called for Kevin Magnussen’s stricken Haas neither Mercedes nor Hamilton realised the pit lane had been closed. Charles Leclerc’s hefty shunt red-flagged the race and when it restarted Hamilton served a 10-second stop/go penalty. Hamilton re-joined last, half a minute behind, but charged forwards to seventh, with Bottas only fifth.

Fighting back at Mugello

Mugello was Formula 1’s first new-for-2020 venue but after Friday practice Hamilton conceded he was “not that great at it yet” and was reluctant to make set-up changes until he got a handle on the track. Hamilton chipped away at his deficit and grabbed pole by a narrow margin – only to lose the lead to Bottas at the start. But amid the chaos that unfolded behind Hamilton kept his nerve, re-gaining the lead with a well-judged move at the second restart and then retaining it third time around.

Bottas claimed a strong pole position in the weather-affected Eifel GP weekend and successfully fought off a first-lap challenge from Hamilton to retain the lead. But Bottas’ race unravelled when a hefty lock-up into Turn 1 opened the door for Hamilton. Bottas was forced into an off-kilter pit stop and then suffered an electrical glitch that prompted his retirement. Hamilton kept Verstappen at bay throughout to collect a win that put him equal with Schumacher and more crucially increased his advantage over Bottas by a whopping 25 points.

Powering through at Portimao

Hamilton trailed Bottas through practice at Portimao but in an unusual qualifying session where the Soft and Medium compounds were similarly matched Hamilton pulled off a strategic gamble by beating his team-mate with a two-lap run. That harder compound choice in Q2 backfired on Mercedes early on as its drivers struggled on a low-grip surfaced doused by a light shower – and Hamilton was slower than Bottas. But as the laps wore on Hamilton powered back into contention, breezed past Bottas, and went on to claim victory by 25 seconds. It was like watching a predator toying with his prey.

An average Q3 at Imola was followed by a tardy getaway that left Hamilton behind Bottas and Verstappen at a circuit where overtaking is difficult. But when Verstappen and Bottas – struggling with aero-compromising debris – came in for fresh tyres Hamilton stayed out and extended the pit delta that he needed. Hamilton had just crossed the threshold when a Virtual Safety Car played perfectly into his hands. He came in, took on new tyres, and emerged in a lead that he would not relinquish.

Mercedes struggled to get its tyres into the right window at a grip-less Istanbul Park and Hamilton held only sixth early on. But as others began to struggle, or opt for a second pit stop, Hamilton nursed his worn Intermediates, gained places, and grabbed the lead from Sergio Perez. Hamilton eventually went on to win by over half a minute while sole title rival Bottas spun six times in total. The victory sealed a seventh world title for Hamilton with three rounds to spare in the truncated campaign.