Verstappen was ‘trying to survive’ during tricky Turkish GP 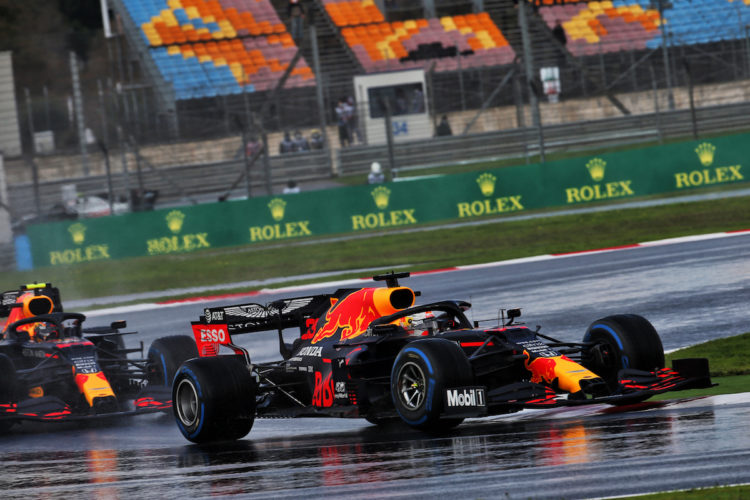 Red Bull’s Max Verstappen has reflected on a difficult Turkish Grand Prix, stating he was simply “trying to survive” throughout the race.

After qualifying on the front row for the start of the grand prix, Verstappen endured a lacklustre opening lap that saw him drop down the order.

As he recovered, he brought himself back into contention for the race victory, but while battling Racing Point’s Sergio Perez at Turn 11, he ran wide and spun around, forcing him into an extra pit stop.

“It was very frustrating to be honest,” Verstappen said. “I tried to follow Checo [Perez] through that kink and then suddenly I just massively washed-out.

“You get onto the green bit and then a big spin. I tried to keep it out of the wall of course but flat-spotted the tyres.”

Verstappen also had a second spin while running behind team-mate Alexander Albon, but still managed to overtake the Thai-British driver for sixth place before the chequered flag.

However, Verstappen added that the “super slippery” conditions meant he was trying to stay on within the track limits for much of the race.

“After that you very quickly catch up with the guys but you can’t pass,” he said. “There’s just one line around here, and that’s already super slippery.

“So it’s super frustrating and we were just waiting for people to pit and whatever.

“The fact the track was not really dry and you keep going on intermediates but at one point when you start wearing the rubber of the intermediates, you are just sliding over that rubber everywhere.

“Really, really difficult. Just following, no grip and trying to survive. Not a great day but hopefully we will never be in this situation again where it is so slippery.”