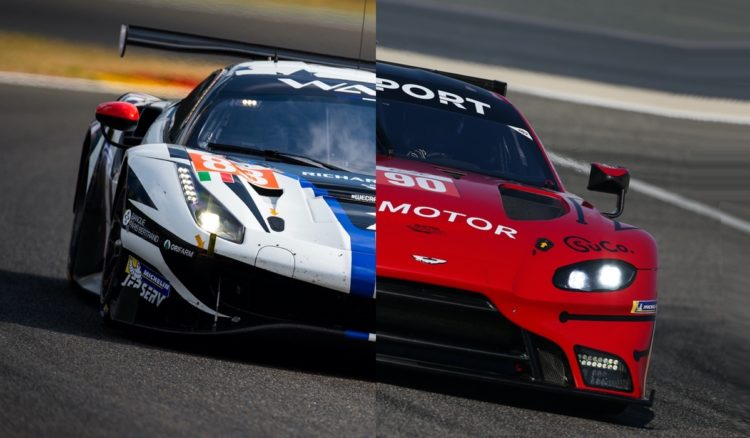 This weekend’s 8 Hours of Bahrain forms the final round of the 2019/20 FIA World Endurance Championship and several titles are yet to be decided. Ahead of the final round in an unusual season, MotorsportWeek.com takes a look at the title fight in each of the four classes. First up – GTE Am, where a two horse race is set to go down to the wire.

The battle for GTE Am during the 2019/20 season finale is really the battle between two teams and two manufacturers. With one race remaining, it’s TF Sport versus AF Corse – Aston Martin versus Ferrari.

With one round remaining, the #90 TF Sport Aston Martin Vantage AMR of Salih Yoluc, Charlie Eastwood and Jonny Adam sit atop the rankings with 148 points – helped by a dominant class win in the 24 Hours of Le Mans.

It was Collard, Perrodo and Nielsen that took led the championship after round one by winning the 4 Hours of Silverstone. After that, however, the TF Sport machine began picking up steam and racking up wins like most people expected them to.

Their first WEC win came in round two at Fuji, and a second win immediately followed at Shanghai, which propelled the team to the top of the standings.

TF Sport’s march to the title campaign hit a snag with a retirement at last year’s Bahrain. AF Corse took back the championship lead, but with a fourth place finish, failing to inflict greater damage at a time where their British rivals were at their most vulnerable.

Tom Ferrier’s outfit then struck back again and charged to victory at Circuit of the Americas before AF Corse fired back and maintained their lead with a fine win at Spa-Francorchamps.

Then came Le Mans, and suddenly, the roles were reversed. The Aston Martins were dominant all race long and a suspension failure from the factory-entered #98 Vantage left TF Sport to win when it counted and leapfrog back into the championship lead, while AF Corse finished third in class.

With 38 points on offer, the two teams are the only ones left in contention for the title. Dempsey-Proton Racing, winless during the season but aided by second place at Le Mans, sit in third with 98 points. They’ll do battle for fourth with the #98 Aston Martin Vantage AMR, which is just two points back.

The two Team Project 1 Porsches, sitting in fifth and sixth, are mathematically also still in the running for third place and will be hoping to return to the same form that propelled Ben Keating, Jeroen Bleekemolen and Felipe Fraga to an impressive win in 2019.

The longtime pairing of Keating and Bleekemolen will have to do without their partner Fraga, however, as he is the latest in a long line of driver swaps for the last round of the season, many of which have been brought on by the clashing finale for the GT World Challenge Europe. Fraga is replaced by Porsche junior ace Dylan Pereira. Like Pereira, Jaxon Evans, another Porsche hopeful, will also make his series debut with Dempsey-Proton Racing.

Richard Westbrook has replaced Augusto Farfus aboard the #98 Aston Martin Vantage AMR due to clashing IMSA duties, while the same is true for Dennis Olsen, who steps in for Matt Campbell at Dempsey-Proton Racing.