Quartararo: Yamaha ‘need to take risks’ to fight with frontrunners 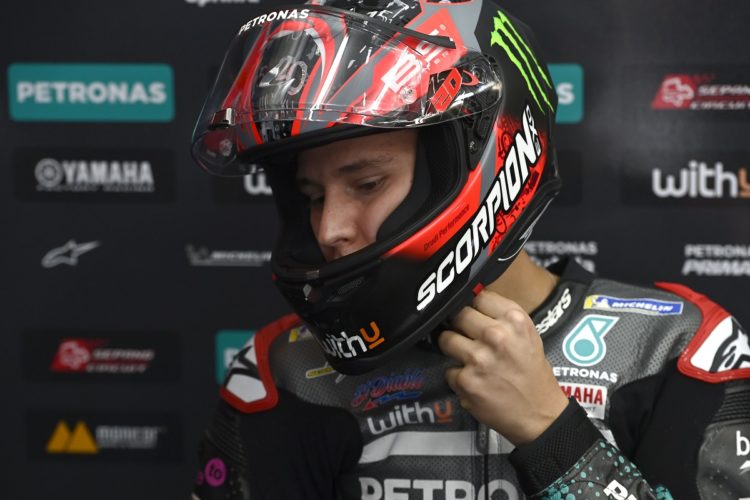 Caught up in a whirlwind of unreliability and drama recently following its recent penalty for using illegal valves in its engines campaigned in the season opening Spanish Grand Prix, Yamaha’s general form has taken a step back in recent races.

Despite Quartararo’s team-mate Franco Morbidelli scoring victory in impressive style two weeks ago in the Alcaniz GP at Motorland Aragon, the Frenchman and fellow title rival Maverick Vinales have struggled to remain within championship contention.

Quartararo has failed to finish higher than eighth since his victory in the Catalan GP in September, while Vinales hasn’t scored a rostrum result since his Emilia Romagna GP success.

Another poor run in the European GP at Valencia for the duo in which they struggled for speed despite having their races compromised-combined with Joan Mir taking a debut premier class win-has seen them drop to 37 and 41 points behind the Spaniard respectively with just two races remaining, rendering their title chances remote.

Despite accepting he was still “mathematically” within contention of fighting for a first MotoGP crown, Quartararo insisted he was heading to the final two races just needing to “have fun”, adding that Yamaha “need to work differently” should it want to end the season on a higher note.

“I think we need to work differently, we need to take risks to fight with the top guys because everyone (riding Yamaha’s) struggled in this race,” said Quartararo.

“Yesterday was difficult but the feeling was much better in the dry, but still not as much as I want.

“The feeling is better but being realistic last year we fought for second and we finished there, we set a 1:29.9 in the qualifying (in 2019) but today on the limit I could do a 1:31.9, and while everyone’s pace was slightly less I didn’t feel great on the bike.

“It is still mathematically possible to win the championship, but I’m in the mindset where now I just need to have fun because there aren’t many race weekend’s where I’m having fun, not because of pressure or anything but because we haven’t found the correct setting.

“It’s really difficult to understand why, but we are still second in the championship and I think we have great potential to finish there and I will never give up until we take the chequered flag in Portimao.”

Quartararo continued on to explain the reason for his early crash that limited him to a lowly 14th by the time he took the chequered flag, admitting he was put off by Aprilia’s Aleix Espargaro ahead who was having his own crash just meters up the road.

“Aleix (Espargaro) crashed just in front of me, and I went down in reaction to that,” said Quartararo.

“When you are on the limit at the start of the race like that, you don’t need a lot to crash and just a small touch of brake at the lean angle you need to be at to open the throttle means you’ll crash.

“Unfortunately that meant we lost many points in this race that was realistically not going to be the best but still quite good.”