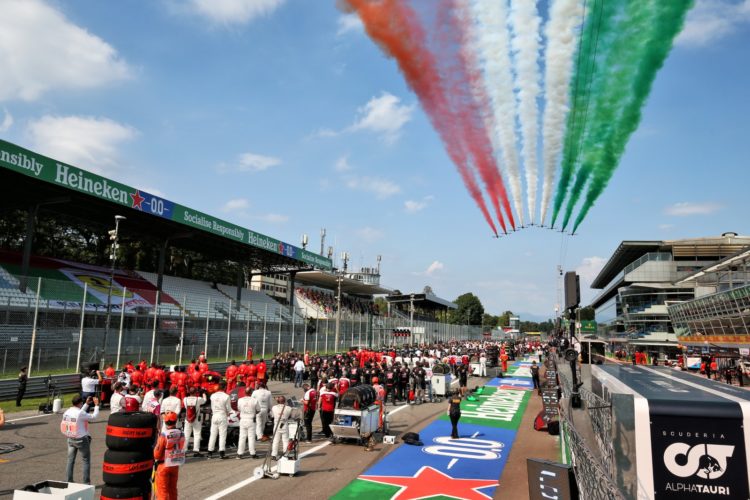 Not since 1982 had one single country been handed the honour of hosting three separate rounds of the Formula One World Championship. MotorsportWeek.com reflects on Italy’s trio of 2020 events and the legacy it should leave.

The Covid-19 pandemic has been a fairly awful experience but an unexpected consequence for Formula 1 has been the appearance or return of a smattering of distinguished venues.

Italy, where more world championship rounds have taken place than anywhere else in the world, managed to put on three events in the space of two months.

Monza, home of the Italian Grand Prix, persisted with holding its event in its usual early September spot.

Ferrari sensed an opportunity and agreed a deal for the Mugello circuit which it owns to hold an event, named the Tuscan Grand Prix, to coincide with its 1000th grand prix.

Imola, which flagged its availability when China’s round looked flaky in February (halcyon days), bagged a spot under the auspices of the Emilia Romagna region, the 100th round to take place in Italy, after San Marino baulked at the prospect.

All three provided a spectacle and grasped the opportunity, one which was entirely unforeseen for two circuits at the start of 2020, to show Italy’s three main motorsport venues in a positive light while also providing a lesson to Formula 1.

Monza, approaching its centenary, has been a near-constant on Formula 1’s schedule, dropping out only once when it was closed for renovation in 1980.

Its location on the outskirts of metropolitan Milan is perfect for a world championship event, with easy access for global destinations, and the setting of the Royal Park is stunning.

Just as Silverstone without the Hamilton fans and Spa minus the orange army were subdued there was a melancholic aspect to Monza due to the absence of the Tifosi.

The Tifosi’s absence was nonetheless a saving grace for Ferrari given a miserable campaign that reached a nadir amid Sebastian Vettel’s brake failure and Charles Leclerc’s violent accident.

Monza has sometimes served up a sedate affair but this year’s encounter was laced with tension as Pierre Gasly netted a shock triumph for AlphaTauri, with McLaren’s Carlos Sainz and Racing Point’s Lance Stroll completing a podium trio that no-one would have predicted.

Mugello has been Italy’s temple to two wheels, where attendees worship at the altar of Valentino Rossi, but for 2020 it was loaned out to Formula 1.

There were fears heading into the weekend that Mugello would not provide stellar wheel-to-wheel racing but such worries were dispelled in all three categories.

The cambered nature of San Donato opened up various racing lines, making it a prime overtaking spot, while the first sector was also witness to some tight battles.

The circumstances assisted the Formula 1 action – particularly in light of the chaotic restart pile-up – but the racing was also captivating in support series Formula 2 and Formula 3.

The flowing nature of the venue, and the proximity of punishing grass and gravel run-offs, met with approval by drivers, who placed the flat-out Arrabbiata right-handers within the bracket of Formula 1’s greatest complexes.

The backdrop was also gorgeous, with rolling Tuscan hills visible at all angles and Florence just an hour by road, while few complained about another dose of pizza and pasta.

The local infrastructure would struggle to cope with hundreds of thousands of fans in a normal year – it would leave Paul Ricard 2018-spec traffic jams – but that was, for 2020, an irrelevance.

Imola is synonymous in Formula 1 circles both in terms of triumph and tragedy, with the 1994 weekend leaving a legacy both at the circuit and in the championship.

It is located in the heart of Italy’s motorsport valley with iconic names such as Ferrari, Lamborghini and Pagani all housed nearby, while AlphaTauri is just a short drive away in Faenza.

Even if the Nürburgring had an unforeseen head-start, Imola’s two-day weekend provided a different approach, forced by the logistical challenge in heaving the paddock from the Algarve to Emilia Romagna, dressed up as a format experiment for 2021 and beyond.

It gave drivers and teams just one 90-minute practice session in which to learn the circuit and refine car set-ups and it was one they largely relished – though rightly pointed out that should the format be adopted in the future some venues, such as Monaco or well-attended events, should retain three build-up sessions.

The challenge of a narrow and quick venue, in the ultra-fast yet oversized modern machinery, left drivers wide-eyed and there were more than a few comments suggesting circuits such as Imola should be more prominent in Formula 1.

As at Mugello there were concerns over Imola’s viability as an actual race track, voiced prominently post-qualifying by Lewis Hamilton, and the first two-thirds of the race did little to allay such negativity as the ‘three amigos’, as put by Toto Wolff, played out a strategic encounter that was slightly nixed by the Virtual Safety Car.

But even so, not every race can be a pass-fest, nor should it be. Watching a procession at an Imola glazed by autumnal colours is much more captivating than viewing ‘action’ at soulless tracks whose backdrops resemble an industrial estate. A 0-0 draw in football with attacking flair at an iconic venue is a more engaging watch than a turgid and scrappy 1-1 at a stale stadium.

Max Verstappen’s tyre failure livened up the final laps as George Russell erred, Racing Point blundered strategically, Daniil Kvyat put on a show, while Alexander Albon’s year went from bad to worse. It was far from an all-time classic but still an enjoyable encounter. With less aero sensitive cars and a slightly amended DRS zone the situation would be further remedied if F1 was to ever return.

Italy’s sanctioning body, the Automobile Club d’Italia, and the respective authorities and venues deserve acclaim for the success of the trio of events.

Few countries in the world – perhaps aside from the UK, US and Japan – are blessed with so many classic well-loved top-level circuits.

All three circuits are an antithesis to some of the more modern facilities that have previously been likened to supermarket car parks and greeted with apathy by fans.

Formula 1 is striving to return to as normal a calendar as possible in 2021 and given the ever-expanding nature of the calendar it is improbable to expect one country to hold two, let alone three, rounds per year. The championship needs to chase the dollar bags in order to balance the books. Once the thorny issue of politics and finance is factored into account the prospect of Mugello and Imola remaining in the championship is slim.

But what they have done is provided a reminder of what’s been lost and given a wake-up call to the championship as it ponders its path for the rest of the 2020s.