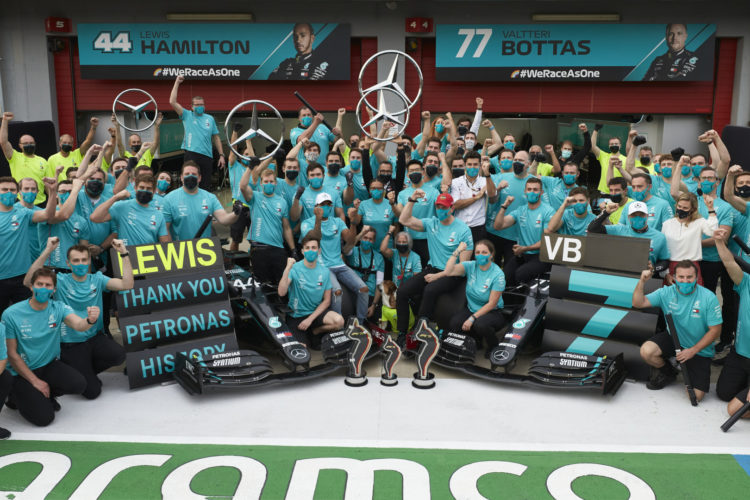 Mercedes clinched its seventh successive Constructors’ Championship with a 1-2 finish at the Emilia Romagna Grand Prix. MotorsportWeek.com looks back through the archives at its time atop the standings.

2014: Formula 1 welcomed 1.6 litre V6 power units under revised regulations and Mercedes laid down a marker. Lewis Hamilton and Nico Rosberg duelled for the crown and Mercedes only lost on three occasions, taking 16 victories from 19. Mercedes wrapped up the title in Russia to become the 15th different team to achieve the feat.

2015: Mercedes remained the benchmark by some margin and once more its record read 16 wins from 19 events, with only Sebastian Vettel and Ferrari – as Daniel Ricciardo and Red Bull had done the year before – breaking the stranglehold. For a second successive season it clinched the crown in Russia.

2016: Its most successful campaign overall. As Formula 1 expanded to a 21-race calendar Mercedes was only beaten twice: when its drivers collided in Spain and when Hamilton’s engine expired in Malaysia. It broke its own record with 19 victories and 735 points, with Rosberg edging Hamilton for the Drivers’ crown before retiring just days later.

2017: Under revised aerodynamic regulations Mercedes faced a credible threat from Ferrari and the lead of the standings swapped hands several times. But once Mercedes got a handle on its ‘diva’ W07 the squad pulled clear and, allied with its rival hitting trouble, eventually wrapped up another title, taking 12 victories from 20 races.

2018: Ferrari put up a more sustained threat across the first half of the campaign and the two teams entered the summer break separated by a mere 10 points. But Ferrari – and Vettel – collapsed as summer turned into autumn as Mercedes and Hamilton hit a new gear. Bottas became the first Mercedes driver in the hybrid era to endure a winless campaign but the team still triumphed 11 teams courtesy of Hamilton and clinched the title with a round to spare.

2019: Mercedes hit a new level with its W10 while opponents Ferrari and Red Bull faltered. Mercedes opened the year with eighth straight victories, the first five being 1-2 finishes, and wrapped up the title in Japan. It finished with 15 victories from 21 rounds in a year in which it had to overcome the loss of Niki Lauda.

2020: The Covid-19 pandemic threatened to derail the season and during the enforced absence Mercedes became part of Project Pitlane, producing breathing aids for patients. When the campaign got underway the W11 proved the class of the field and so far Mercedes has taken all 13 pole positions, 11 victories, and more than double the points tally of its nearest rival. Its Imola triumph was its 100th win of the hybrid era.