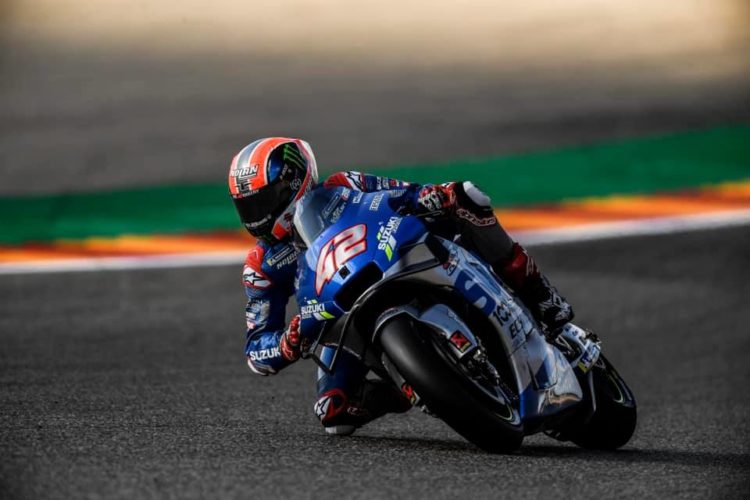 Team Suzuki Ecstar rider Alex Rins stormed to victory in the Aragon Grand Prix, while poleman and Championship leader Fabio Quartararo failed to score as he struggled to 18th.

Rins was able to hold off the Factory Repsol Honda of Alex Marquez after being caught in a dogfight with the Spaniard during the last three laps of the race.

He took the lead on lap 8 at Turn 16 after sliding his Suzuki GSXR-R underneath the Yamaha of Maverick Viñales.

Marquez made up a total of nine places during the 23-lap event, having started from P11, while his team-mate Stefan Bradl finished in 17th for the Factory Honda squad.

Both Marquez and Rins’ bikes suffered from rear-tyre degradation in the final half of the race as they slid and wiggled around the Spanish circuit.

The victory for the number 42 pilot means that he becomes the 8th different winner of the 2020 Moto GP World Championship.

Despite a strong start, Fabio Quartararo had a difficult race after losing ground to faster riders behind before tumbling down the order to finish in the bottom half of the field.

Quartararo’s team-mate Franco Morbidelli was able to rekindle some hope for the SRT Petronas team, the Italian rider spending the majority of the race battling with the front runners before finishing in 6th place.

It was a day of mixed emotions for the Pramac Racing Ducati outfit as their number 63 rider Francesco Bagnaia crashed on the third lap while Australian Jack Miller was able to finish in 9th place.

The factory KTM rider of Brad Binder ended up in 11th place for the Austrian outfit, followed closely by his team-mate Pol Espargaro in 12th place.