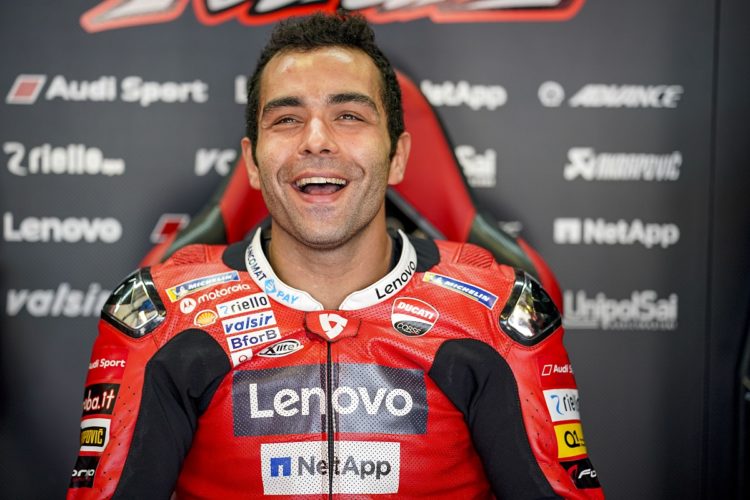 Ducati’s Danilo Petrucci has credited a recovered “feeling under braking” as the chief reason for his improved competitiveness across the French Grand Prix race weekend.

The nine-time MotoGP podium finisher looked to have found a decent turn of speed on Friday at Le Mans, ending the day fourth in the combined times.

He then qualified an excellent third-his first front row since the ’19 Italian GP-despite having to contest Q1 after finding himself unable to improve in FP3 due to having all his final efforts ruined by yellow flags.

Petrucci said that he and his Ducati outfit “knew what direction to take the bike” heading into the weekend thanks to a breakthrough in his breaking technique with the GP20 at the previous round in Barcelona.

“This morning (in FP3) was frustrating as there were a lot of yellow flags and I simply couldn’t complete my lap, and I was so angry about that,” explained Petrucci.

“I knew that it was possible to get into Q2, for sure it’s a great result for me after a long time since being on the front row.

“We’ve done really good work during the weekend, we knew what direction to take the bike before the weekend and it worked, tomorrow will be tough because more or less all the Q2 riders can fight for the podium so it is very important to start from the first row.

“My competitiveness hasn’t been as good as I’d hoped this year, but since Catalunya I’ve recovered a good feeling under braking which was the area I’ve struggled the most.”

Petrucci added that following pole-man Fabio Quartararo early on in the French GP could be key to securing a debut podium appearance of the season, reckoning that the championship leader has “a bit more” speed relative to the rest of the field.

“I think the temperature and track conditions can help me as they are allowing me to keep the tyres in the correct window,” continued the ’19 Italian GP victor.

“I also have a lot of braking zones where I can attack and defend.

“I knew already that Le Mans would be good for me and I would be around the fight for the podium, tomorrow will be crucial as everyone will be really close, all the Yamaha’s and Ducati’s in particular will be tough.

“I need to try and get a good start and then to follow Fabio who I think will have a bit more (speed than the others), and hopefully that’ll allow me to secure the podium.”

Petrucci has struggled for form since claiming his first-and so far only- premier class win at Mugello last year, the Italian having not secured a rostrum result since the 2019 Catalan GP last June.

His drop in results led to Petrucci being dropped from the Ducati factory squad in favour of Jack Miller earlier this year, his best finish of ’20 so far being seventh in the Austrian GP-leaving him a distant 14th in the rider’s points standings.

Team-mate Andrea Dovizioso has also struggled to maximise the braking potential of the Desmosedici this season due to the updated rear tyre construction introduced by MotoGP tyre supplier Michelin this year.

He looked to have made a breakthrough of his own after claiming victory in the Austrian GP after suffering at the season-opening double-header races at Jerez, though this was soon proven to be a false dawn as he has failed to capture a podium finish since.

Petrucci has secured a switch to the Tech 3 KTM team to replace the promoted Miguel Oliveira for ’21, while Dovizioso will likely have to settle for a test role after coming to the decision to leave Ducati at the end of the year ahead of the Austrian GP weekend.