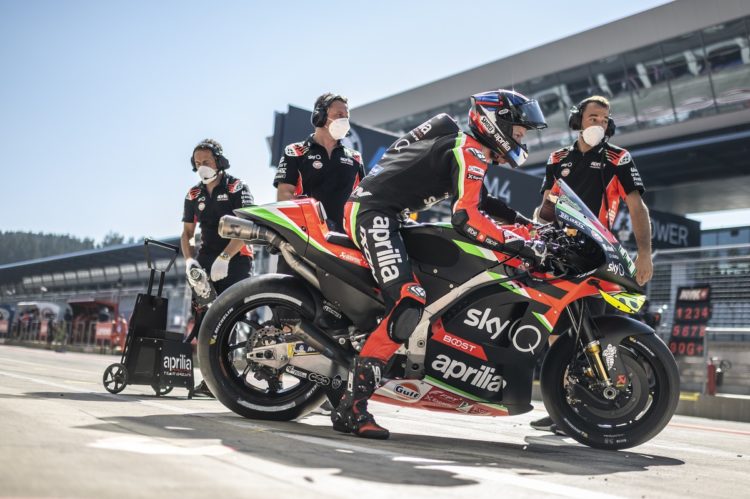 Bradley Smith was a shock fastest in opening practice for the French Grand Prix at Le Mans, the Brit mastering the slippy conditions to head Avintia’s Johann Zarco.

FP1 saw the times reduce almost every lap due to a cocktail of improving conditions and ever accelerating rider confidence, though it looked like Ducati would have a stranglehold as its riders over the factory and Pramac satellite outfits consistently appeared to fire to the head of the timesheets.

A rough seven second improvement was seen from the start of the session until Smith’s ultimate benchmark of 1:43.804, the Aprilia man giving the Italian manufacturer something to smile about following a tough debut season for its new RS-GP machine with a lap posted in the dying seconds.

Behind the impressive Smith it was indeed Ducati that looked the real deal, although it was the year-old GP19 of Zarco that grabbed the second quickest effort-0.154 down on the Aprilia- ahead of the factory Desmosedici of Danilo Petrucci in third.

Fastest of the Yamaha’s was Maverick Vinales, the Emilia Romagna victor heading his M1 stable-mates Franco Morbidelli and Valentino Rossi in sixth position.

Cal Crutchlow was an encouraging ninth for LCR Honda as he continues to recover from his injured arm, while KTM’s Pol Espargaro rounded out the top ten after threatening the leading positions earlier in the test.

Elsewhere Alex Marquez led the factory Honda organisations charge in 14th overall ahead of the second Aprilia of Aleix Espargaro, while Takaaki Nakagami was another to work his way in gently as he slotted in just ahead of Quartararo in 17th.