Honda timeline: From laughing stock to the winner’s enclosure 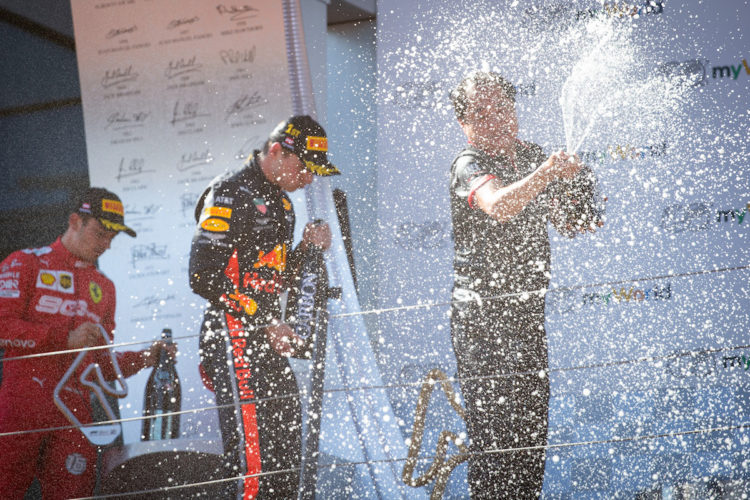 After six years as a power unit supplier during Formula 1’s turbo-hybrid era, Honda announced on Friday that it will depart the championship after the 2021 season. MotorsportWeek.com delves into the journey that the Japanese manufacturer’s current stint in Formula 1.

Honda has a long but somewhat inconsistent relationship with Formula 1. After racing as a Constructor during the mid-1960s, Honda returned in 1983, enjoying a successful relationship with Williams, winning a total of 24 grands prix in five years. In 1988, it linked up with McLaren, it what would become one of the most iconic partnerships in F1 history – despite lasting just five Championship seasons during the first stint.

It won 44 races with the Woking-based squad, including four world championships with Ayrton Senna and Alain Prost. It competed in Formula 1 once more in the 2000s, winning with the team it acquired from BAR, but quit amid the economic downturn in 2008.

In May 2013, Honda confirmed a new project that would see it reunited with McLaren in 2015, the second year of the turbo-hybrid era. It ran its nascent power unit in the MP4-29 at the end of 2014 but a disastrous outing, with just five laps amassed over two days, ominously indicated what was to come.

The thought of rekindling such a successful collaboration was intriguing enough to reunite McLaren with Fernando Alonso, in spite of the tortuous end to his previous time at the team. However, the maiden campaign of the partnership was a disaster and dreams of emulating the success of the late 80s were soon dampened.

It became clear that Honda’s engine was both far off the pace and unreliable, which resulted in zero points from the first six races. Alonso did not even participate in Australia after a mysterious accident in testing – and replacement Kevin Magnussen suffered a failure on his way to the grid.

Jenson Button finally scored points with eighth in Monaco while Alonso bagged a shock fifth in a chaotic event in Hungary. But that result, alongside a tenth place finish at the previous round at Silverstone, marked Alonso’s only points finishes of the year, bringing into question his decision to join.

Button finished sixth at the US Grand Prix, but it was little consolation to the poor season, which left McLaren ninth in the Constructors’ Championship and only one position in front of backmarker Manor Marussia. Honda’s reputation took a hit, which wasn’t helped by the public outbursts of Alonso, who often didn’t hesitate to vent his frustrations over team radio.

Most humiliating, and infamous, was his ‘GP2 engine’ remark at Honda’s home circuit Suzuka. The lack of performance was hampered by a shortfall in reliability that led to multiple engine penalties that sometimes reached ludicrous numbers under the FIA’s system. Honda’s prospects were also not aided by McLaren’s tight packaging, already indicating that the relationship was not as smooth as it tried to convey.

Simply put, 2015 was embarrassing for Honda, a company that is a symbol of Japanese culture and that prides itself in top, exquisite engineering. Honda appointed Yusuke Hasegawa as its Head of F1, replacing Yasuhisa Arai, and early signs in 2016 were more promising for Honda and McLaren.

Points finishes came more regularly during the season with Alonso finishing the year 10th in the standings and McLaren coming a reasonable sixth, though Button had a more troubled time and opted to call time on his Formula 1 career.

The car, coupled with the Honda engine, proved not only to be faster than its predecessor, but it was also more reliable than the previous year – Alonso, who failed to finish three times during the year, could only account one of his DNFs to a power unit problem.

As the 2016 campaign wore on Honda’s engineers realised that its concept had limited long-term potential and worked on a revised layout – bringing it more in line with its competitors – for 2017. Changes were also afoot at McLaren. Ron Dennis stepped down from his role as McLaren boss after unrest from the team’s board and was replaced by Zak Brown.

There was renewed optimism – but that quickly collapsed after a disastrous pre-season campaign. After another issue Alonso’s thinning patience snapped as he declared “we only have one problem: that is the power unit. There is no reliability and there is no power. We are 30km/h down on the straight, every straight.”

At that point McLaren sought a swift exit – even sounding out Mercedes for an immediate alliance – though Honda tried to salvage the relationship with new specification power units that had limited impact.

With GP2 star Stoffel Vandoorne now on board full-time, points were akin to finding gold-dust during the opening phase of the season. While matters improved in the latter stages of the campaign, the strenuous three years meant a divorce was inevitable and through a sequence of convoluted agreements involving several parties the split was finalised in September.

McLaren-Honda finished its partnership ninth in the standings.

2018: Rebuilding out of the limelight

Honda had been firmly in the spotlight with McLaren but it remained on the grid for 2018 with Red Bull’s junior team Toro Rosso. It was beneficial for both parties. Toro Rosso opened its arms to being the sole focus for an engine marque after years of ineffective customer deals while Honda welcomed the reduced pressure and greater scope to assess ideas, having replaced Hasegawa with Toyoharu Tanabe.

In just its second race together, Pierre Gasly – who worked with Honda in Super Formula the previous season – flourished at Bahrain to take a fourth-place result, its best result since 2015. Honda was also assisted by the input of the erudite Brendon Hartley, whose off-track nous was not matched on-track, as he failed to regularly match Gasly’s high points in a year of peaks and troughs for the collaboration.

Toro Rosso finished only ninth in the standings but Honda’s season was enough to convince Red Bull that the senior squad should also be equipped with its power units from 2019. It marked a strong recovery for Honda, just a year on from its malaise with McLaren, whose own troubles with Renault in 2018 highlighted the deficiencies at Woking as well.

Honda had a second crack at the big time with Red Bull as it sought to silence its critics, showing it had the resources, manpower and spirit to compete at the front of the field.

Red Bull played down its championship hopes and insisted that maintaining its 2018 form into 2019 was a realistic target – reducing some of the pressure on Honda. But Honda still had high hopes.

Success came at Australia’s season-opener, as Max Verstappen took third place for Red Bull, marking Honda’s first podium finish since it returned to the sport in 2015.

Matters only progressed from there – Verstappen consistently finished inside the top five and took another podium result at Spain. In Austria, Honda won its first grand prix in the hybrid era, with Verstappen out-muscling Ferrari’s Charles Leclerc to take the chequered flag.

It had waited four years for a victory but another one came just two races later as Verstappen won a rain-hit German Grand Prix and was joined on the podium by Toro Rosso’s Daniil Kvyat, the first time two Honda-powered drivers had achieved the feat.

That looked to be the high point – but then at the penultimate round in Brazil Honda claimed a 1-2 finish in spectacular circumstances. Verstappen triumphed while Gasly out-dragged World Champion Lewis Hamilton to the finish line.

It was a scene that firmly emphasised the progress that Honda has made since 2015, in that it was able to out-race Mercedes to glory, who has possessed the most consistent power unit since 2014.

2020: Shock victory for AlphaTauri – but then shock exit

Mercedes’ dominance has been impressive so far in 2020 and the championship charge has yet to materialise.

Verstappen nonetheless added multiple podiums, and another win at Silverstone, with Red Bull second in the standings amid Ferrari’s demise. Should the team maintain second in the championship it would be the highest classification for a Honda-powered squad since 2004.

The shock achievement for Honda was its victory with AlphaTauri – on the partnership’s 50th race – at Monza, which was previously the scene of several humiliations when its power shortfall was emphasised.

Less than a month after that famous triumph Honda convened a press conference at short-notice on Friday to communicate its decision to withdraw after the 2021 season.

Aside from having one less manufacturer on the grid, Honda’s story of progress is an inspiring one, and its hunger to leap back into contention drove it to uncover a new project that brought new-found respect. The Japanese culture is a much-loved one in F1, and Honda was a titan that brought that culture to the on-track activities. Its road in F1 over the last five years has not been easy – but if anything, it has been memorable.