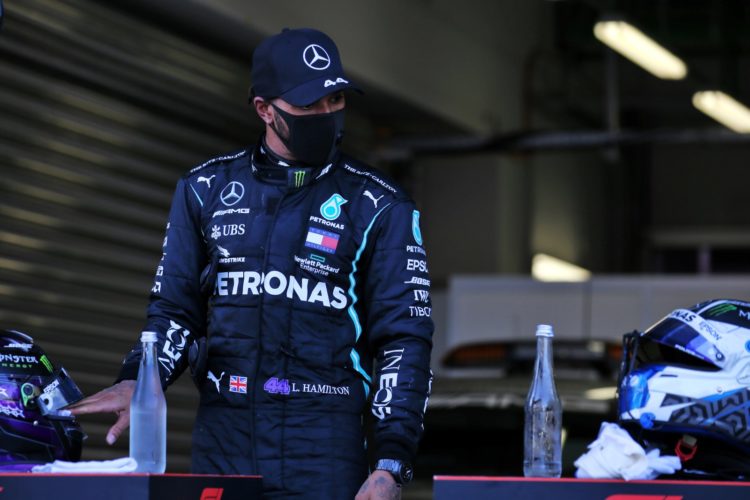 Lewis Hamilton started on top at the Russian Grand Prix but ended on the lowest step of the podium, stewing and skulking at the perceived injustice of a contentious penalty. MotorsportWeek.com analyses the situation

What did Hamilton do?

Why was Hamilton investigated – and what do the rules say?

Stewards immediately investigated Hamilton for an alleged breach of FIA International Sporting Code Article 12.1.1(i), failure to follow the instructions contained in the Event Notes (v3) item 19.1, practice start location. He was also investigated for a breach of Article 36.1 of the Sporting Regulations.

Item 19.1 of the Event Notes states that “practice starts may only be carried out on the right-hand side after the pit exit lights and, for the avoidance of doubt, this includes any time the pit exit is open for the race. Drivers must leave adequate room on their left for another driver to pass.” Article 36.1 of the Sporting Regulations is lengthy but it is understood that Hamilton’s breach refers to the section that advises drivers to maintain a constant speed through the pit exit.

Why did Mercedes think it was fine?

It was a combination of ambiguity and miscommunication. Mercedes’ interpretation of the Event Notes was such that it believed Hamilton was permitted to travel slightly beyond pit exit, where the practice starts are carried out, and advised him that he was indeed allowed to head beyond the usual zone. But it did not realise just how far down the pit lane he had travelled.

Mercedes’ Trackside Engineering Director Andrew Shovlin conceded that the team missed Hamilton’s first practice start and that “when we saw the second one we thought they’re [the FIA] not going to like that. We didn’t think it was dangerous and given that the event notes said that it was on the right hand side after the pit exit we thought it might have been ambiguous enough that we might have just got a telling off, but when we saw the car’s position it wasn’t a complete surprise that they didn’t like it.”

“There is no mention what the right place is in the directors’ note, nor is it in the regulations,” said Mercedes boss Toto Wolff. “We disagree [with the stewards] on that one. We agree to disagree on that one.”

Why was an in-race penalty applied?

It was an unusual state of affairs for a driver to be handed two five-second time penalties for a transgression carried out prior to the race itself but Formula 1’s Race Director Michael Masi explained the situation.

“In the view of the stewards, in performing that practice start in that area, in their view it was a sporting advantage,” he said. “Having spoken to them quickly, therefore they thought an appropriate penalty was a sporting penalty. The spectrum is wide from a penalty area and the stewards have the ability to apply any of the penalties in the sporting regulations and the international sporting code.”

Why were his penalty points rescinded?

Hamilton was handed one penalty point for each of the practice starts, bringing his rolling 12-month total up to 10, but these were later withdrawn and a replacement document was issued. Mercedes was instead fined €25,000. It means Hamilton is still on eight penalty points.

“Lewis and Mercedes spoke to the stewards,” said Masi. “At which point it was [understood it was] actually a team instruction to Lewis of where he could perform those practice starts. On that basis the stewards rescinded the penalty points as they thought it was inappropriate and as a result have fined the team €25,000. Lewis followed his team instruction and, yes it was him driving the car, however a contributing factor was his team instructed him to do so at that point and therefore they [stewards] saw it fit to revise their decision accordingly.”

Was there any previous precedent?

No. And an irate Hamilton vented his frustration.

“Generally, if you look at probably every race that I’ve done this year, at least, I always start further down,” said Hamilton. “Never, ever had a problem, done it for years. It’s no different to Brazil. You drive to the end of the pit lane and you do your start. It’s actually probably safer where I was, compared to Brazil, because there was a lot more space on the left… so interesting decision.”

But Masi suggested Hamilton had not been entirely accurate with his view.

Did it actually cost him the victory?

This is an ultimately unanswerable question but it was not a slam dunk that the sanctions definitively robbed him of the race victory.

Mercedes switched Hamilton to Softs, a decision he tried to reverse, at the end of Q2 after Sebastian Vettel’s crash left him without a time. It left Hamilton on the softer – and in theory higher wearing – rubber for the opening stint of the race. The plan was that Hamilton would come in first, change to Hards, with Medium-shod Bottas coming in later, leaving him with a shorter stint on the tyres. That would have potentially set up the prospect of Bottas hunting down Hamilton in the closing stages at a circuit that has traditionally favoured him. Hamilton feared after qualifying that he was already destined for an inferior strategy. He was nonetheless brought in earlier than he wanted, having expected to stay out for another five laps due to the Safety Car period, with Mercedes explaining the call.

“When those tyres drop and the rear left was the limit on his car, there was very little rubber left on it, so it would have done one or two laps [more],” said Shovlin. “What we notice is at Sochi the tyres don’t lose a lot of grip until they get down to the underlayer and when it drops it’s sudden. When you have the penalty you look a long way back and you realise those guys [in the midfield] can undercut you. He was down to one or two more laps on that tyre and in the field any car on the Medium would be gaining race time on you.”

Hamilton then entered more of a conservation mode as opposed to a fight mode had he been in the thick of a non-penalty battle with Bottas, believing he needed to be cautious to get the compound to the flag, while also negotiating yet-to-stop rivals. Bottas had tried to relegate Hamilton at the start but slotted in to second and then had the benefit of free air once his team-mate had pitted, assisting his own pace up front. Mercedes then responded to Red Bull pitting Max Verstappen by boxing Bottas a lap later, covering off the threat of a Safety Car. Hamilton finished 22 seconds behind Bottas – a net 12 without the penalty – but how much was down to the impact of the sanction and circumstances thereof? We’ll never know.

“Going to today I knew that there would be opportunities,” said Bottas. “I knew that one of the best ones would be the race start but I knew that even if I can’t make it there it’s now over, because obviously with the Mediums tyre it’s quite an advantage in race time and in terms of strategy, so yes, of course I believed I could do it. But who knows. He got that penalty and that’s it.”