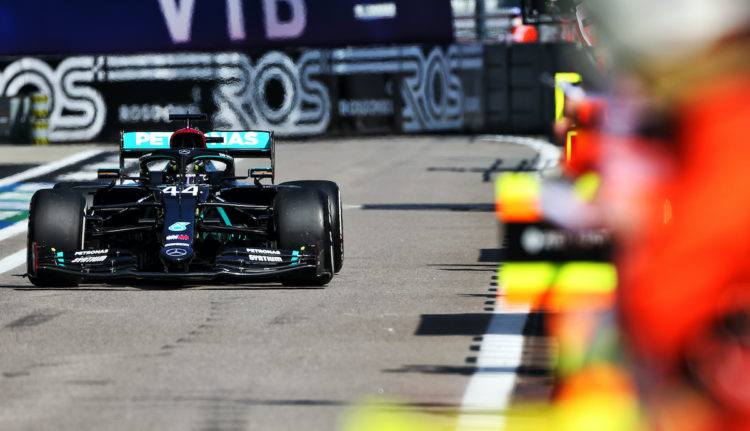 The FIA’s Michael Masi has responded to Lewis Hamilton’s claim that they are “trying to stop me” from winning races.

Hamilton was handed two time penalties during the Russian Grand Prix after he conducted two practice starts outside of the designated area, making a victory from pole position all but impossible – and delaying his record-equalling 91st Formula 1 win.

Speaking after the race, Hamilton questioned the penalties and accused the FIA of bias towards him.

“I’m pretty sure no one has ever got two five-second penalties for something so ridiculous before,” he said.

“They are trying to stop me. But it’s OK. I’ll just keep my head down and stay focused and see what happens.”

Race Director Masi has ruled out any bias, insisting any driver would have received the same penalty, and says his “door is always open” if Hamilton wants to discuss matters privately.

“From my perspective it’s very simple that if Lewis wants to raise something – as I have said to him before and said to all the drivers numerous times – the door is always open. I’m more than happy to discuss anything,” he replied when asked about Hamilton’s post-race comments.

“I think from an FIA perspective we are there as a sporting regulator to administer the regulations. We have the stewards as an independent judiciary to adjudicate those.

“There was an infringement and, it doesn’t matter if it was Lewis Hamilton or any one of the other 19 drivers, if a breach has occurred of the regulations they will consider it on its merits.

“Further to that I would say they adjudicate it equitably and fairly in the circumstances, taking all of the key elements into account.”

Mercedes team boss Toto Wolff called the penalty “far-fetched” for what he believes was a minor infraction.

Hamilton also received two penalty points to bring his total to 10 – just two shy of a race ban – however the FIA agreed to rescind these and instead imposed a €25,000 fine after it was revealed that the team informed Hamilton it was OK to carry out the starts where he did.