Honda: Marquez to be out of MotoGP action for further ‘two to three months’ 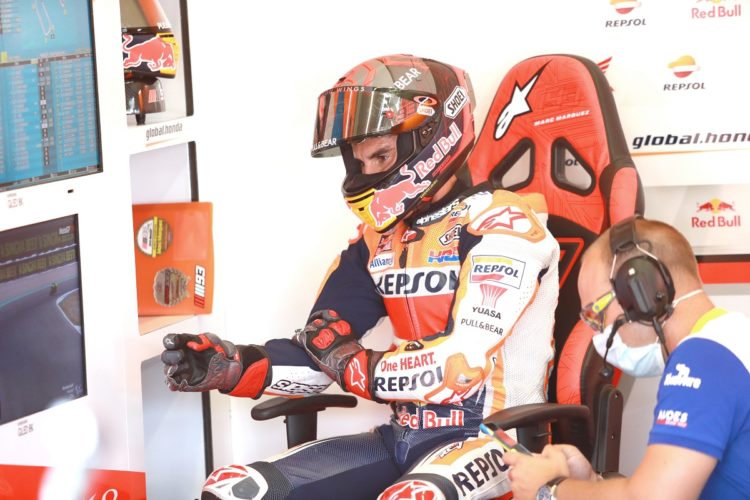 Marc Marquez will remain out of MotoGP action until at least October according to his Honda MotoGP squad, with both parties deciding to return only when his broken arm is “fully recovered”.

The timeframe given for the reigning MotoGP world champions recovery by Honda is “two to three months”, meaning the earliest event likely for a return would be the French GP at Le Mans in mid-October, with the Aragon double-header following directly afterwards.

Honda MotoGP Team Manager Alberto Puig reiterated in a statement released by the outfit on Saturday afternoon that the manufacturer would not rush Marquez back into competition until he is back to “one hundred percent.”

“There has been a lot of talk about Marc’s recovery and the various deadlines, but from the first day after the second operation we have said that the only objective that exists is for him to be one hundred percent,” said Puig.

“We do not want to rush. Once Marc is in a position to return and compete at the level he knows, then we will think about the next objective.”

Marquez suffered a broken humerus in his right arm following a huge high-side while chasing Maverick Vinales for second place in the Spanish GP at Jerez last month, forcing him to miss the following weeks Andalucian GP at the same venue.

After undergoing surgery in the week following the Spanish GP in order to install a titanium plate and screws to aid the healing process, he then suffered another setback after damaging the plate by trying to “open a window”, forcing him to undergo further surgery and miss the Czech GP as well as both Red Bull Ring events.

The Spaniard has been replaced by HRC test rider Stefan Bradl until he returns to action, the German joining Marc’s brother and reigning Moto2 world champion Alex Marquez at the squad.

Results have been hard to comeby for the pairing though, Marquez having secured a best result of eighth so far in the Andalucian contest on his way to 15th in the riders standings-having scored points in every race so far.

Bradl is yet to score in his first two races so far this season, leaving Honda a lowly fifth ahead of only Aprilia in the manufacturers standings.

Takaaki Nakagami has proven to Honda’s saviour so far as LCR team-mate Cal Crutchlow continues to struggle through injury,  the Japanese racer having scored his best ever result of fourth in the Andalucian encounter before bagging second on the grid for Sunday’s Styrian GP.