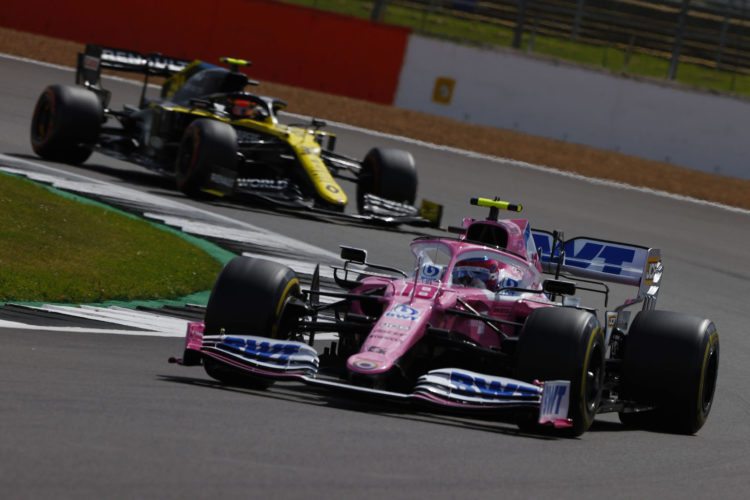 Racing Point has been stripped of 15 points in this year’s Constructors’ Championship, issued a fine, and reprimanded after stewards upheld Renault’s protest of its brake ducts.

Renault protested the front and rear brake ducts of the RP20 after the Styrian Grand Prix, repeating the process in Hungary and Britain, and a hearing into the matter was held on Wednesday.

On Friday morning the stewards published their decision and concluded that Racing Point had flouted the regulations regarding the rear brake ducts only.

The stewards deemed that a 7.5-point penalty per car (15 points in total), along with a €200,000 fine per car (totalling €400,000), was the appropriate punishment for the Styrian GP – where Renault first protested the Racing Point RP20.

The stewards only issued reprimands for the following two races (Hungary and Britain) as they felt the aforementioned penalty was “proportionate for the violation of the design process”.

Racing Point can continue to use the contentious parts going forward without further penalty.

Racing Point has the right to appeal the decision.

How was the decision reached?

Renault’s argument is based on the design of Racing Point’s front and rear brake ducts (BDs), which are identical to those run by Mercedes in 2019. Renault claims Racing Point must be in possession of CAD data to be able to reproduce the same design, which cannot be done via photographs alone.

However as a customer of Mercedes, Racing Point were legally in possession of Mercedes front brake ducts which it incorporated into the design of its 2019 car.

At the time these were “non-listed parts” (non-LPs), but under changes to the regulations became “listed parts” (LPs) for the 2020 season, meaning a team must design their own and they cannot be purchased from a rival outfit.

Racing Point used the prior knowledge and data it had of the brake ducts to reproduce them on its 2020 car, the RP20.

The FIA acknowledged this process in its verdict and said it was satisfied under a “grandfathering” agreement that the front brake duct design could be carried over.

This same agreement doesn’t apply to the design of Racing Point’s rear brake ducts (RBDs) because they designed their own for the 2019 season, opting not to buy them from Mercedes.

“Although Racing Point received the CAD models for the Mercedes W10 RBDs at the same time as the FBDs, it chose not to use RBDs based on the Mercedes models in the RP19 (possibly because the aerodynamic rake of the RP19 was much higher than the W10 and so the aerodynamics were very different),” the FIA’s verdict reads.

Because Racing Point hadn’t used this rear brake duct design on its 2019 car and knew it would be a listed part in 2020, the FIA consider it a breach of the Sporting Regulations (SRs).

“Racing Point was not refining a component that had already been incorporated into the DNA of the RP19. Instead, it was introducing a completely new component for the RP20, which it knew was classified as a LP under the SRs.

Stewards deemed the 15-point penalty appropriate in the circumstances and accepts that Racing Point “could probably have obtained much of the same amount of competitive advantage from photographing the Mercedes W10 RBDs and reverse engineering them, albeit with additional design resources expended in the process.

“In every respect regarding this matter, Racing Point has been open and transparent with regard to their actions, which they fully believed to have been compliant with the regulations, and the Stewards attribute no deliberate intent to any breach of the regulations that occurred.”

As the team has been found in breach of Sporting Regulations, rather than Technical Regulations, they can continue to use the components on the RP20.