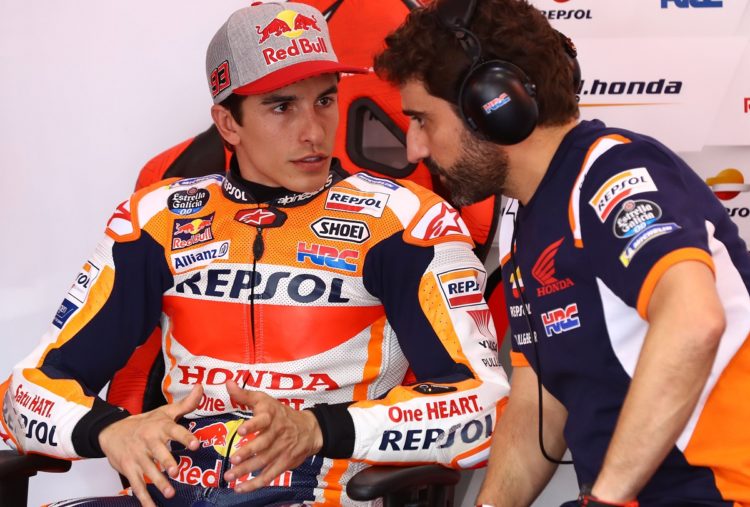 Marc Marquez has been diagnosed with a broken humerus in his right arm following his violent crash at Turn 3 in the MotoGP season opener at Jerez.

Recovering from an earlier off at Turn 4 that dropped him to 16th, the reigning world champion had managed to cut through the field to third, and was chasing down second-placed Maverick Vinales when he high-sided on the exit of Turn 3.

The Honda racer was thrown through the air and landed heavily on his right shoulder and arm before rolling several times through the gravel trap on the exit of the bend.

He was stretchered away from the scene after being visibly in pain and unable to move his right arm, before being transferred immediately to the medical centre for examination.

Honda confirmed the news of Marquez’s humerus fracture in a short statement just over an hour after the incident, stating that he will undergo an operation on the injury at the nearby Hospital Universitari Dexeus on Tuesday.

His recovery time is currently unknown, Honda confirming they will share any details following Marquez’s operation.

“A fall at Turn 3 while fighting for the podium has resulted in a broken right humerus for the reigning World Champion, who will travel to Barcelona for surgery,” began the statement from Honda.

“After mounting an incredible comeback in the Spanish GP, Marc Marquez suffered a high side at Turn 3 and came down heavily on his right arm. As a result, the eight-time World Champion has suffered a transverse diaphyseal fracture to his right humerus. MotoGP medical staff have confirmed there is no other serious head or thoracic trauma but will remain under observation for 12 hours.

“Marquez will travel to the Hospital Universitari Dexeus in Barcelona on Monday, July 20 and is aiming to be operated on by Dr Xavier Mir and his team on Tuesday, July 21st.

“Recovery time is as yet unknown, the Repsol Honda Team will provide an update after the operation.”

Dovizioso suffered a broken collarbone in a motocross crash two weeks ago, but a swift operation and a fortnight of recuperation allowed the Ducati ace to secure a rostrum result in the Jerez race with third.

Rins and Crutchlow were forced to miss the contest through their own injuries suffered during the weekend, the Suzuki racer getting side-lined by a dislocated shoulder inflicted in qualifying on Saturday afternoon, while Crutchlow was declared unfit after a crash in morning warm-up on Sunday morning.

With Rins likely to be out until at Brno at the earliest, Marquez’s injury could remove another potential title contender from the mix, firmly thrusting Yamaha duo Fabio Quartararo-who took victory at Jerez- and Vinales into the spotlight along with Dovizioso.