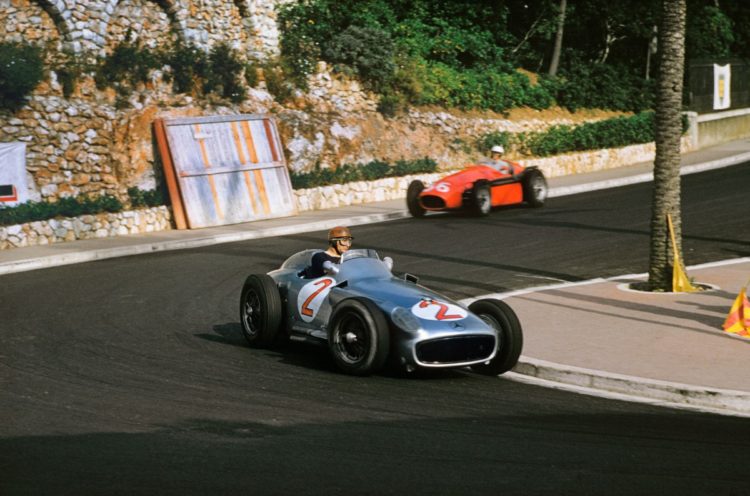 Formula One celebrated its 70th birthday last week. A few names from that illustrious first chapter in F1’s rich history are well known. Fangio, Ascari, Farina and Moss are all names that speak to the imagination. But beyond that, many names will often illicit a response along the lines of ‘who?’

That might be because the early days of F1 aren’t as well documented as its later years. Names and pictures might be harder to come by and some of it might just have been lost to history.

Luckily, that’s where Formula 1: Car By Car 1950-59 comes in. Written by experienced motorsport writer Peter Higham, the book is the latest in a series that has previously covered the 1960s, 70s and 80s.

Higham, based in Middlesex, has been working as both a writer and publisher for some three decades, with some of his previous work including the World Encyclopaedia of Racing Drivers and the International Motor Racing Guide.

The book, published by Evro Publishing, counts in at an impressive 304 pages and takes you on a tour of every team and car to have raced in the first decade of Formula One’s existance. It kicks off with the first season in 1950 and season-by-season, it explores every single team to have competed in each campaign.

The nature of this setup ensures that you go truly in depth on every single team and encounter names you might never have even heard of. Of course, you encounter the legendary names like Alfa Romeo, Maserati, Ferrari and Mercedes-Benz, but the book also allows you to get familiar with names that perhaps might have faded from memory, like Ecurie Francorchamps, Alta or Equipe Gordini.

It is in this impressive attention to historic detail where this book perhaps shines brightest. The tales of victory by the likes of Ascari, Moss, Fangio and Hawthorn are well-documented and have almost become part of F1 folklore over the years. But the tales of individual industrialists and amateur racers, scraping together funds to have a go at the world stages are worth telling as well, and Higham gives these early-age minnows their spotlight.

Another added benefit of this season-by-season approach is that it paint a compelling picture of the changing landscape in F1’s formative years. It begins with dominance by Alfa Romeo in the early years, followed by the rise of Ferrari and Maserati, the arrival of the Silver Arrows of Fangio and Moss and eventually, the arrival of British outfits like Vanwall and Cooper, the latter of which ushered in the change to the rear-engined format that F1 still adopts to this very day.

Each season forms its own chapter and is concluded with the season results, which acts as a nice summary to what you have just been reading. It includes the exploits of every driver and car, a list of race winners and last but not least, the results of the drivers championship.

While the book is very strong in the amount of data, information and attention to detail, it perhaps shines brightest when it comes to the images. The book features a stunning 600 images in both black-and-white and in colour. These images capture some of the sport’s early heroes in action, while also presenting you with glimpses of cars you didn’t even know existed.

Whether you want to see the recently departed Stirling Moss pilot his Mercedes or see Fangio race for Alfa Romeo in F1’s first season, it’s there. Also there are oddball cars from the likes of HWM, Connaught or Gordini, whose bulky, cigar-like shapes look ancient compared to what Formula One would eventually become.

These images also serve as an astonishing reminder of how the face of the sports has drastically changed. Picturing the current look of the Monaco Grand Prix makes it almost unbelievable when you see Fangio, Moss, Ascari and Farina race on nothing more than the unobstructed streets while they fly past spectators standing mere feet away. A dip in the harbour, like Ascari did in 1955, seems unthinkable these days, but these images are here to prove that it really did happen.

Formula 1: Car By Car 1950-59 is a truly impressive insight into a long-forgotten chapter in F1 history. The large amount of collected information is laid out in a nice and clear manner and could very well give even the most in-the-know of F1 fans some new things to learn. But even if you’re not a know-it-all but rather somebody who wants to learn more about the first decade of Formula One, then this book is definitely one to be recommended.

And even if you already know a lot about this chapter of Formula One history and just like to gawk at what Formula One used to be, this book’s impressive image catalogue definitely suits your needs as the collection of images is definitely one of the book’s strongest points.

So whether you’re a diehard fan or just want to learn more about the illustrious past of the pinnacle of motorsport, it’s definitely picking up a copy of this book. And what better way to #stayhome than to explore the rich tale of the great sport’s formative years?

All images provided to Motorsport Week by Evro Publishing