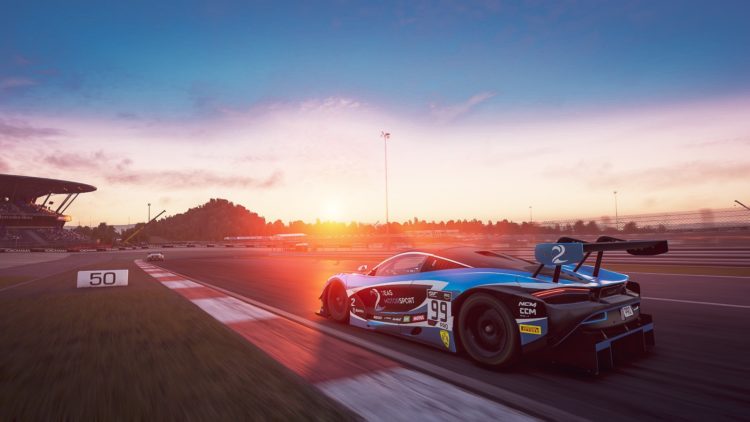 Ben Barnicoat has won the Nürburgring round of the SRO E-Sports GT Series, beating Louis Deletraz to the line by seven hundredths of a second.

Round one winner Jordan Pepper has started on pole in his Bentley Continental GT3 but was beaten off the line by the GPX Racing Porsche 911 GT3R of Deletraz, who took led the field into turn one. To make matters worse for Pepper, he was then tagged by Barnicoat on corner exit, sending him spinning off and dropping down the field.

Deletraz then led ahead of Barnicoat’s McLaren 720S GT3 and the Absolute Racing Porsche 911 GT3R of Alessio Picariello, but the latter’s chances at a podium would be short lived. The Italian would lose third place to the Bentley Continental GT3 of Andy Soucek, with Soucek pulling off a hipcheck-like pass on Picariello at the Veedol Chicane to take the position before dropping down to fifth behind Romain Monti.

Picariello then got involved in a multiple-car battle for fifth place, which also involved Spa winner Lorenzo Marcucci, Luca Ghitto, David Perel and Ben Tusting. Unfortunately, that battle ended in tears for Picariello, Marcucci and Ghiotto when the former ran into more bad luck and spun at turn one and subsequently collected Marcucci and Ghiotto, dropping them both down the order.

While the midfield battle ultimately culminated with David Perel finishing on top in fifth place, the fight for the lead significantly ramped up towards the end when Deletraz, who had been leading comfortably in the first half hour, was caught by Barnicoat and ultimately passed when the Swiss youngster appeared to make a mistake that allowed Barnicoat into the lead.

Deletraz then continued to pressure the McLaren factory driver for the remainder of the race, ultimately culminating in a sprint to the flag that saw the two cars finish side by side. Barnicoat took victory ahead of Deletraz. Andy Soucek finished third for Bentley ahead of Romain Monti, while David Perel finished fifth.