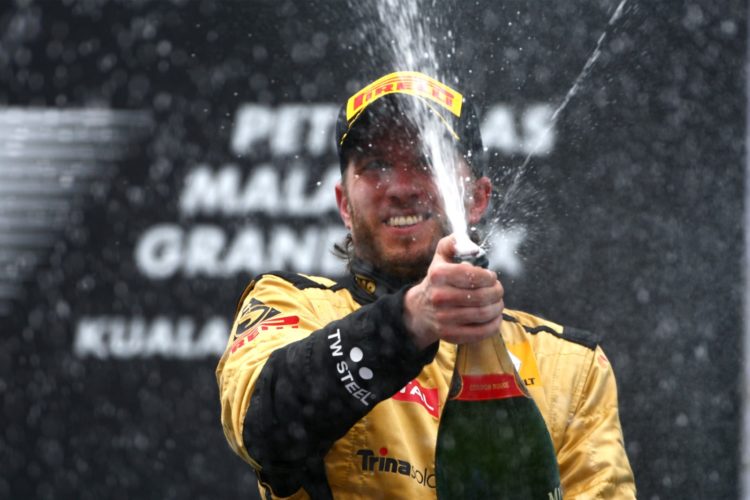 Throughout the 70-year history of the Formula 1 championship 764 different drivers have started a grand prix, with 108 fortunate enough to stand atop the podium. But who could and should have added to that tally? Motorsport Week takes a look at the best drivers who have never, or have yet, won a grand prix.

Behra competed for the likes of Maserati and Ferrari, took a dozen wins in non-championship grands prix when they were all the rage, but never won a World Championship Formula 1 event. The fiery Behra claimed a podium on his second start in Switzerland in 1952, and after a lean spell enjoyed his greatest success with Maserati in 1956, taking fourth in the championship along with five of his nine career podiums. Behra’s 1959 stint with Ferrari was short-lived as he was sacked after assaulting a team member and at the fearsome AVUS circuit just a few weeks later he lost his life in a sportscar crash. Several streets in his native France have been named in his honour.

The name Chris Amon is never mentioned without the moniker ‘Formula 1’s unluckiest driver’ being added as a postscript. Amon scored five pole positions, 11 podiums and won the Le Mans 24 Hours, but was never able to collect a single victory in Formula 1. Amon’s career in the championship stretched from 1963 right through to 1976, during which period he competed for a combination of privateers and manufacturers, most notably Ferrari. Amon suffered from reliability issues at critical junctures and more than once was robbed of victory – in 1968 he retired from half of the 10 grands prix, including from a winning position, and in 1969 failed to finish five of the opening six races, a return that prompted his early exit from Ferrari. Amon led 183 laps across his Formula 1 career – no-one has spent more time at the front of a grand prix without emerging victorious.

Cheever doesn’t exactly have a bad record in motorsport: a two-time Le Mans runner-up, an Indianapolis 500 victory, and more starts in Formula 1 than any other American driver. Therefore it is safe to put him among the best drivers never to have triumphed in the championship. Only once – in 1983, with Renault – did Cheever truly have competitive machinery. He scored four podiums in that sole campaign with the manufacturer and elsewhere took top-three finishes with the unfancied Ligier and Arrows outfits. It left Cheever with a record of nine podiums despite never climbing into truly top-level Formula 1 machinery. Only Michael Andretti, Scott Speed and Alexander Rossi have represented the country in Formula 1 since Cheever’s departure.

Warwick now serves as the President of the British Racing Drivers’ Club, and has occasionally been an FIA steward, but had a highly successful racing career, peaking with the 1992 Le Mans 24 Hours victory and World Sportscar title. In Formula 1 Warwick was a ferocious talent but never scored the win his ability deserved. His four career podiums all came with Renault in 1984 – a team that was on the decline after a successful spell. Prior to that he was with the emerging but off-the-pace Toleman team while spurning a Williams seat in 1985 undoubtedly cost him his best shot. Ayrton Senna vetoed Warwick joining the successful Lotus outfit and instead he spent the next years with Arrows, dragging uncompetitive machinery far higher than it deserved, notably missing out on a potential win when his engine failed at the rain-hit 1989 Canadian GP.

Le Mans winner Stefan Johansson had a strong hit rate of 12 podiums from 77 Formula 1 starts but none of his dozen trophies came for finishing on the top step. Johansson surprisingly wound up at Ferrari just a race into 1985, replacing Rene Arnoux, but unfortunately for him his spell at the famous marque coincided with a relative drought, while a year at McLaren came before the arrival of the dominant Honda engine – and Ayrton Senna. Johansson took four runner-up positions and was in contention for a handful of wins until poor reliability struck. His exit from McLaren ostensibly spelled the end of his front-running years but he sprung one more surprise in 1989 when he finished third for the unfancied Onyx team, in a season in which he failed to even pre-qualify eight times.

For the younger generation Brundle is the peerless sports broadcaster who pioneered the gridwalk and has been the voice of co-commentating for almost 25 years. But prior to picking up the microphone Brundle was one of the quickest drivers of his generation, competing in Formula 1 for over a decade, either side of a victorious tilt at the Le Mans 24 Hours. Brundle took his first podium in only his eighth race in 1984 but his Tyrrell was later excluded, he fractured his ankles in a hefty practice shunt next time out, and the team disqualified from the campaign for cheating. It took until 1992 for Brundle to record a legitimate podium finish and he registered another eight with Benetton, McLaren and Ligier. Unfortunately for Brundle he was with all three iconic teams during a fallow spell: Benetton had yet to peak, McLaren was in its mid-1990s doldrums, while Ligier was long since past its best.

‘Quick Nick’ raced alongside highly successful future race winners, started almost 200 grands prix, but the top step of the podium remained elusive. After a miserable rookie year at backmarker Prost in 2000, Heidfeld scored a podium in only his third race for Sauber in 2001. Across the remainder of his career Heidfeld competed for Jordan, Williams, BMW Sauber and Renault, failing to mount the rostrum only with Eddie’s eponymous team. Heidfeld took 13 podiums – eight seconds and two thirds – but the breakthrough never came. Of his eight runner-up spots six were to current or future champions Kimi Raikkonen, Fernando Alonso, Lewis Hamilton and Jenson Button. The closest he came to success was in Canada in 2008, when he backed up team-mate Robert Kubica for a BMW 1-2, having obeyed a team instruction to allow the strategically off-set Pole through.

Hulkenberg started 177 grands prix but never even made the podium, let alone reach the victory enclosure. Why? A mixture of competing for midfield teams, strategic blunders and driver errors. Hulkenberg claimed one pole and took a pair of top-three starts elsewhere, most impressively for Sauber at Monza in 2013. Hulkenberg could have had podiums at several races but never quite made the breakthrough – though the most famous one that got away came in Brazil, in 2012. Hulkenberg surged into the lead of the crazy season finale and still held second after a half-spin in greasy conditions. Hulkenberg tried re-taking the lead from Hamilton but slid into the McLaren at the Senna S, wiping out the Briton, and spinning himself – while earning a penalty. Hulkenberg is holding out hope of a return to Formula 1 in the future, meaning there is ostensibly still time for the German to end his drought.

Would Perez have won a race in a more competitive era, with less reliability? Undoubtedly so. As it is the popular Mexican has mounted the podium on eight occasions. Perez claimed three rostrums with Sauber in the wildly unpredictable 2012 season and has since added five more with Force India during an era in which only three teams have triumphed. He has only spent one year with a ‘top’ team, but even that came when he jumped into the McLaren for 2013. Perez’s arrival coincided with the start of McLaren’s slump, he briefly burnt his own reputation, and soured relations with a Ferrari organisation whose Driver Academy he left to up sticks to Woking. Nonetheless there is surely still time for Perez to take himself off the list. Disregarding the unknown elements due to the coronavirus Formula 1 is striving to implement a more equal playing field while simultaneously Perez’s Racing Point team is on the rise, with owner Lawrence Stroll investing heavily prior to the 2021 Aston Martin rebrand. Perez is contracted through 2022. Could a win come by the end of that deal?

It is unlikely that there is any driver whose mention so divides opinion. Grosjean can be maddening at his amateurish lows but at his entrancing highs he has delivered stunning results. In four years with Lotus Grosjean claimed 10 podium finishes and on several occasions across the back end of 2013 he was the main challenger to Sebastian Vettel and Red Bull. Unfortunately for him the Vettel/Red Bull axis was in its ruthlessly dominant final fling, winning all nine post-summer races. Only Vettel led more laps than Grosjean across that second half of 2013. Lotus’ plunge from form scuppered Grosjean’s hopes for 2014 after two years of competitive machinery. One last podium with the team came in Belgium in 2015, an against-the-odds result achieved amidst the bailiffs knocking on the garage door due to Lotus’ financial woes.