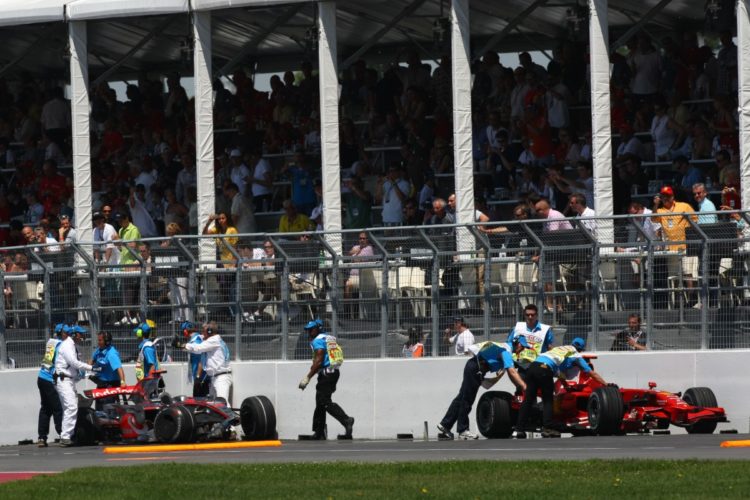 Formula 1’s technological improvements during its 70-year history have meant the modern hybrid monsters on-track today are the fastest and most reliable cars the championship has ever seen.

However, no matter how great those improvements have been, it’s just not possible to account for everything despite how hard engineers and designers may have tried, cars have dropped out races for sometimes the most peculiar of reasons.

In no particular order, Motorsport Week takes a retrospective look at some of F1’s strangest retirements.

F1 has always strived for clinical excellence, making sure that every parameter is measured and correct…however, sometimes you cannot ever account for human error.

The British driver qualified 15th for Sauber at Monza and but in the race lost control of his car at the second Lesmo and crashed out.

Whilst it appeared it was caused by driver error, it later turned out that a mechanic had left a spanner inside the cockpit of Herbert’s C17 during pre-race preparations. During the race after rattling around the floor of the cockpit, it eventually worked its way underneath the brake pedal and it forced the 1995 Italian GP winner off the road.

Team-mate Jean Alesi showed the potential of the C17 at Monza by classifying in fifth place.

Prior to his spanner-induced retirement Herbert, during his Benetton days, had stood triumphantly atop the Monza podium – albeit courtesy of a bizarre set of circumstances.

Polesitter David Coulthard spun his car into a gravel trap on the formation lap, but due to a crash on the opening lap of the race, he was able to take the restart, only for a wheel-bearing failure to finally end his miserable day.

Title contenders Damon Hill and Michael Schumacher battled at the front of the field but collided at the second chicane, eliminating both.

This left the Ferrari duo of Jean Alesi and Gerhard Berger leading the race, much to the delight of the Tifosi.

However, their joy was short-lived, as on lap 32 a rear-facing TV camera on Alesi’s car fell off and struck the suspension of the pursuing Ferrari, leaving Berger with no choice but to retire.

Alesi remained in the lead, but also had to retire with his own wheel-bearing failure with just eight laps to go, leaving Herbert to claim his second career win.

F1 ventured to the streets of Singapore in 2008 with a specially-designed layout around the Marina Bay district – breaking new ground by running the race at night time.

The Red Bull RB4 was not a front-running machine which its offspring would become, limiting Mark Webber and David Coulthard to only the seventh row of the grid.

Webber had worked his way up the order and was firmly in the mix for points but shortly before mid-distance retired the car in the garage due to a strange electrical failure.

It was later revealed that the gearbox was trying to select two gears at once – which is not supposed to happen!

It was suspected that the subway system beneath the circuitcaused an electromagnetic disturbance to the car as a train passed through the area whilst Webber had driven over the top at the same time.

Reigning World Champion Button led the standings as Formula 1 rolled into Monaco in 2010 and the Briton was out in search of successive victories around the streets of the Principality.

A difficult qualifying session left McLaren driver Button down in a tricky eighth place on the grid for the 78-lap race, but his hopes of a recovery drive came to an end after just a handful of minutes.

Button pulled his overheating MP4-25 to the side of the circuit exiting Sainte Devote on the third lap, bringing his race to a halt. There was to be no repeat of the glorious 2009 victory.

Why? A mechanic had left a cooling bung in the left sidepod, causing the Mercedes engine to severely overheat.

The perennially unlucky Webber makes his second appearance on the list.

After a weekend affected by a typhoon which never arrived, qualifying took place on Sunday morning, and there was a slightly mixed-up grid, with one-lap specialist Webber grabbing a fine third for the midfield Jaguar squad.

Not long after the race got underway however, the Australian began to feel temperatures rise steadily in the cockpit. With the heat growing, when Webber made his first stop, the team even poured a bucket of water into his cockpit to try and alleviate his ever-increasing discomfort inside the car.

But that resulted in only slight respite and as the situation deteriorated the pain reached an unbearable level, prompting Webber to abandon his valiant efforts, as he gingerly stepped out of the car.

In 2003, Formula 1 implemented the mandatory use of the HANS device, designed to restrain the neck in the event of a crash, preventing basilar skull fractures.

The rather tall Justin Wilson was in his rookie campaign for Minardi and in Malaysia his seatbelt slid from his shoulder, taking the right arm of the HANS device with it.

With an already difficult afternoon in the sweltering heat of Sepang as well as a power steering failure on his PS03, the pain had become unbearable for the British driver which had led to him make the choice to park the car in the garage.

It took the team almost 10 minutes to extract Wilson from the car and he was sent to hospital for checks due to the excruciating pain coupled with the lack of mobility in his right arm. Wilson did return to the car two weeks later for the next race in Brazil.

Montoya’s debut season with McLaren in 2005 had been turbulent to say the least: he missed two races early in the season through a ‘tennis injury’,was disqualified from the Canadian Grand Prix after jumping the red light at the end of the pitlane, and also retired from the lead in Hungary.

Despite the Colombian never getting to grips with an MP4-20 he felt was unstable, he was able to still record three wins for the Woking-based outfit in the latter half of the season.

Renault and McLaren were locked in a close battle for the Constructors’ title as the sport entered the final of 19 events, which in 2005 was held in China.

But McLaren’s hopes were dealt a striking blow – literally and figuratively – when Montoya hit an exposed drain cover exiting Turn 10.

McLaren tried to keep Montoya’s car in the race but the steel grate had punctured a hole in the floor and radiator which meant the car was no longer being cooled properly.

In the heat of the Singapore night, Rosberg looked set to take on team-mate Lewis Hamilton for yet another race win in 2014 and try to extend his 22-point lead in the standings. Having lost out on pole position by just 0.007s, he was keen to make amends on race day except fate intervened in one of strangest ways possible.

As the formation lap got underway, the German was unable to select a gear and was forced to start from the pit-lane. After a steering wheel change he was eventually able to get the car moving but nothing would work on his dashboard except for the gear selections, while he was also missing the hybrid power from the battery which meant he was 160 horsepower down on his rivals.

After struggling to pass the backmarkers of Max Chilton and Marcus Ericsson, Rosberg attempted a pitstop, but due to his issues he had to manage his own speed in the narrow Marina Bay pitlane, and was unable to get going as the clutch did not engage.

Despite yet another steering wheel change, the problem worsened further with gear selection becoming impossible with the car just no longer accepting any inputs into the wheel from Rosberg. It was decided then to retire the car.

This was all due down to a faulty wiring loom!

Every modern racing car has had decades of research poured into it to make it as safe possible for its driver in the event of a crash, whether that be the structural integrity of the chassis, wheel tethers or even something as innocuous as a fire extinguisher onboard in case of a fire.

Unfortunately for Toyota’s Olivier Panis that device turned against him when his bottle exploded during the 2004 British Grand Prix.

Panis’ TF104 filled with foam along the Hangar Straight and he was left with no option but to pull over as soon as possible.

Marshals had to assist Panis, with the foam and vapour having filled his cockpit and visor, but thanks to swift attention he was able to quickly recover and return to action at the next event.

Lewis Hamilton has taken seven victories in just 12 years at the Circuit Gilles Villeneuve, with his first of 84 wins coming at the Canadian Grand Prix venue. But could it have been eight?

In 2008, the British driver led from pole position and was looking in good shape early on, but a Safety Car period nullified his advantage over his rivals.

The neutralisation phase coincided with the first round of stops and Hamilton, Robert Kubica, Kimi Raikkonen, Nico Rosberg and Fernando Alonso all dived into the pit lane to take on fuel and tyres.

Raikkonen and Kubica jumped Hamilton, who was ostensibly taking on more fuel, and lined up side-by-side at the end of the pit lane, with the red light remaining on until the Safety Car queue passed.

Hamilton only saw the red light at the last second and while he steered left to avoid Kubica, he struck the rear of Raikkonen’s car, eliminating both. Rosberg, following behind, hit the back of Hamilton’s car, causing damage to his own front wing.