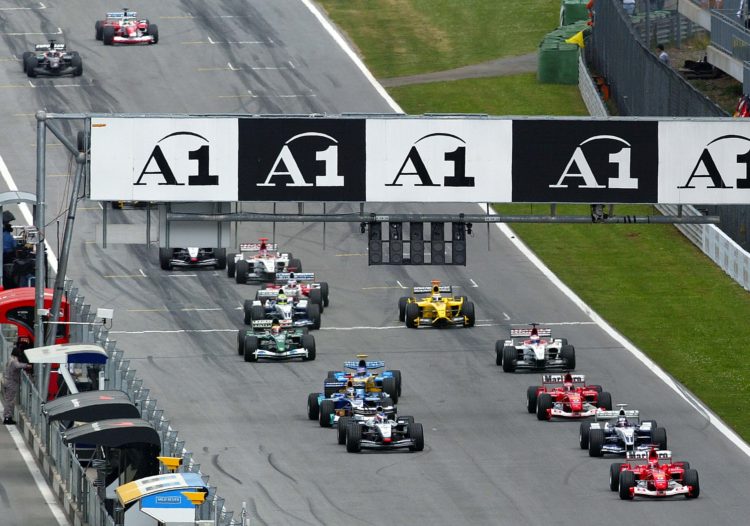 The start of a Formula 1 race is often pinpointed as the most crucial moment – but what happens when things don’t quite go to plan? Motorsport Week looks back at some of the strangest sights, procedural mistakes, and other mishaps, that took place at a grand prix start.

A wet but drying circuit greeted the drivers in Montreal in 1989 – and led to two of them starting before the actual race start. From P5 and P13 respectively Nigel Mansell and Alessandro Nannini ducked into the pit late at the end of the formation lap in order to change to slick tyres. Mansell and Nannini hurtled down the pit lane but rather than be greeted by a red light they were instead met by a flashing orange light and re-joined the circuit. However, the race had yet to start: all of the other drivers were lining up on the grid as Mansell and Nannini emerged from the pit lane. Mansell and Nannini thus ‘led’ actual leaders Alain Prost and Ayrton Senna, and the rest, by a handful of seconds. Prost retired and Senna recaptured the advantage a few laps into the race before Mansell and Nannini – despite the error being down to race organisers – were disqualified.

Suzuka hosted Formula 1’s title finale between polesitter Michael Schumacher and front-row starter Mika Hakkinen, with the points permutation effectively meaning the race winner would be crowned champion. Jarno Trulli stalled at the end of the formation lap, leading to an aborted start, and after a brief break everyone set off on the second formation lap. When that was done and dusted Schumacher took up his spot – but stalled. Schumacher signalled to race control, the start was halted once more, and when a third formation lap got underway he had to wait for every other driver to pass, as per the regulations. He lined up at the back, the pole position slot was left vacant, clearing the path for Hakkinen to win the race and take the title.

A grand prix that has gone down in the annals as unpredictable, wild and crazy had a suitably bizarre start. The five red lights came on and a host of front-runners – including pole-sitter Heinz-Harald Frentzen – went to move before they were extinguished. But as they did so the three orange aborted start lights appeared due to backmarkers Alessandro Zanardi and Marc Gene being out of position further down the grid. Frentzen and third-placed Mika Hakkinen came to a halt a few metres after the start line while a smattering of other front-runners also moved, with the rest of the grid in their normal positions. The drivers were pushed back into their positions by mechanics and after a 10-minute delay another formation lap was followed by a proper start – at which midfielder Pedro Diniz was tipped into a spectacular roll. As the initial start was aborted none of the front-runners who moved before the lights went out were penalised.

Starts at Monaco are boring and processional? Not always. In 2000 Pedro Diniz failed to get away on the formation lap but further drama came when Alexander Wurz suffered an engine failure, thus necessitating an additional formation lap. There was initially no problem on-track but a glitch in the timing system erroneously led to the computer believing the race had been stopped. The race got underway but shortly afterwards marshals along the pit straight showed red flags – but nowhere else. At the hairpin Pedro de la Rosa ran into Jenson Button, spinning the youngster’s car, and causing a track blockage. With the race already suspended several drivers had to sprint back to the pit lane for their spare cars. Some made it within the 10-minute cut-off, others didn’t, meaning they had to start from the pits. Thus when the grid lined back up there was a sizeable gap on one side stretching from Irvine (P10) to Zonta (P20), with P12 (Wurz), P14 (Button), P16 (de la Rosa) and P18 (Heidfeld) all absent or in the pit lane!

It isn’t often that the long-shot TV angle of the grid features a car facing almost sideways to the action before the lights have even gone on, let alone off. And yet that’s what happened in Malaysia in 2001. Benetton’s Giancarlo Fisichella pulled forwards too far on the wrong side of the grid at the end of the formation lap before making a late move to his actual slot. He tried making it across the grid but failed to make it, and the start was aborted as a consequence. Astonishingly, at the same event two years on, Fisichella overshot his grid box and had to undertake a reversing manoeuvre to get back into the correct spot. Fortunately he got it right, the start went ahead moments later, albeit ironically a problem left him stranded in his box.

A 20-car grid usually lines up in 10 x 10 formation on either side. But in Austria in 2003 it was a case of 11 x 6. How? Well, the drivers who were meant to start P17 and P19 – Mark Webber and Fernando Alonso – did so from the pit lane. At the end of the formation lap Cristiano de Matta’s Toyota (P13) suffered an electrical issue and it caused an aborted start. These were the days in which mechanics returned to the grid to ready the cars for another start attempt, and da Matta was permitted to take up his original position. And then it happened again at the end of the second formation lap. When the field went away for a third formation lap Heinz-Harald Frentzen’s Sauber (P15) did not move, so his car was wheeled into the pits, where it remained. Meanwhile, on safety advice da Matta was instructed to line-up at the very back, and on the pit lane side for quick removal, in case the problem arose for a third time. It meant that at the eventual race start one side of the grid had only P1, P3, P5, P7, P9 and P11, while the ‘even’ side had its full representation, along with outlier da Matta in a notional P22.

Surely the most famous peculiar start happened at one of Formula 1’s lowest ebbs. Michelin could not guarantee the safety of its tyres across a race duration at the Indianapolis Motor Speedway after a spate of failures, and near-failures, through practice. Attempts were made to salvage the situation but the respective parties could not agree on a resolution amid heightened political tension and at the end of the formation lap the 14 Michelin-shod cars pulled into the pit lane to retire. That left just six cars on the grid: the two Ferraris, two Jordans and two Minardis, all supplied by Bridgestone. They lined up as they qualified, in P5, P7, P17, P18, P19 and P20 respectively, with the other 14 spots vacant. At least all six drivers made it through the opening lap, and, mercifully, lasted until the finish as well. But the sight of just six cars racing to Turn 1 – with the Ferraris substantially ahead – is Formula 1’s lasting legacy at IMS.