Insight: Another Canadian billionaire dips his toes into F1 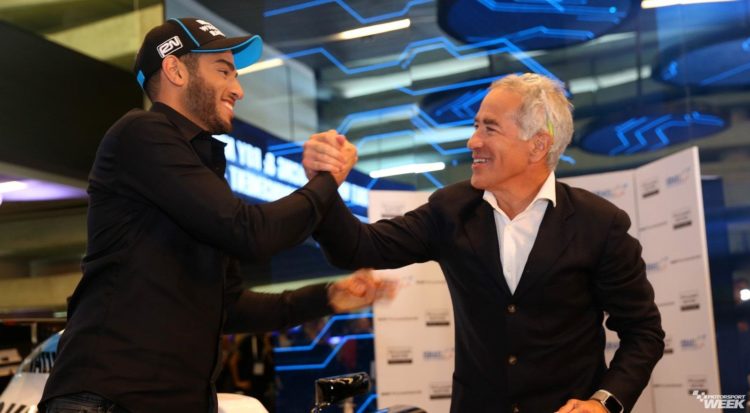 Motorsport Week was one of a select group of media which travelled to Israel to attend the press conference involving Williams and Roy Nissany. But another prominent attendee caught the attention on Wednesday.

The announcement of Roy Nissany joining the Williams Formula 1 team barely caused a ripple in the environment in which the championship operates, but it was big news from an Israeli perspective.

The press conference took place in Tel Aviv’s innovative Peres Center for Peace and Innovation, adjacent to the Mediterranean Sea.

A handful of international media were flown out to the event in Israel but were significantly outnumbered by the throng of local written press and TV crews, who hung on every word of Nissany and deputy team boss Claire Williams.

The packed auditorium was more reminiscent of a major Formula 1 announcement than a test driver deal, with several dignitaries – including the son of the ex-Prime Minister after whom the building is named – present on the front row. He also spoke glowingly during the press conference.

But one intriguing figure joining the press conference was the vocal and charismatic Sylvan Adams.

He was introduced and present on the five-person panel as the President of Roy Nissany Formula 1 Management.

Adams’ profile has grown in recent years courtesy of his desire to promote Israel on the world stage.

Sylvan, an Israeli-Canadian, eventually took over the business, before handing control to his own son in recent years, and his estimated worth is over $1bn.

You only need to have a passing knowledge of the championship’s recent history to join the dots between Canada, wealth and Formula 1.

Lawrence Stroll has been involved in Formula 1 for a couple of decades and his prominence has grown through the acquisition of Racing Point mid-2018, with son Lance now one of its drivers.

Michael Latifi, father of 2020 Williams Formula 1 debutant Nicholas, invested £200m into McLaren in mid-2018 through the Nidala company that he controls.

But what of Adams?

Alongside philanthropic ventures, funding scholarships in education and medicine, growing Israel’s profile has been one ambition.

Having taken up cycling in his 40s Adams, as co-founder, is heavily involved in the UCI team Israel Start-Up Nation. After rising through the lower ranks the team will this year compete on the World Tour, including the iconic Tour de France, after acquiring the licence of another squad. In 2018 Adams was influential in bringing the Giro d’Italia – another of cycling’s blue-riband events – to Israel. The opening three days of action took place in the country, the first time it launched outside of Europe, while in 2019 he was involved in the Eurovision Song Contest, which was held in Tel Aviv after Israel’s 2018 victory. Adams was key in luring Madonna to perform the interval act while he also donated to the country’s space exploration programme.

“The Giro provided proof of concept that bringing such events to Israel can reach ordinary people all over the world,” he told the Globes news agency in early 2019. “The Giro gave us an opportunity to show these audiences the real Israel, the country that people don’t know. What I want to do is create a fund backed by Israeli and Jewish philanthropists from all over the world, raise $100 million, and bring events here, such as the Eurovision, for example, or Formula 1.”

Ah, Formula 1. Back to January 2020 and the Williams event in sunny Tel Aviv.

“I happened to meet this young man Roy at a cycling event where we were presenting the team,” said Adams on stage on Wednesday.

“I met this impressive young man who told me a little bit about his racing career. I guess one thing led to another and here we are.”

Nissany has so far had a moderately successful record in racing, peaking with victories in the 2016/17 Formula V8 3.5 championship, prior to a challenging year in Formula 2 in 2018. A wrist injury denied Nissany a full-time 2019 drive but he will return to the grid in 2020 with Trident.

“The fast track plan here is for Roy to be an actual F1 driver as early as 2021,” said Adams, while wary of the high benchmark this sets.

“Of course he has a few hurdles to accomplish before he is selected to be one of the two drivers.

“Remember this is one of the exclusive sports in the world, there are only 20 Formula 1 race car drivers, and there’s 750 people working on two cars.

“I’ve been to the campus at Williams. I know how hard Williams is working to climb back up to the top, and I know with the best talent in the industry, both engineering side and now the test driver side, that they will have every chance of getting there.

“To see the Israeli flag on the car and Roy being beamed to 350-400 million television viewers every couple of weeks is going to be quite something, I’m getting goose bumps even talking about it.”

Adams stressed that he is not interested in acquiring a Formula 1 team, or setting up his own, but is regarding the new venture as more than just a short-term box-ticking operation.

“I keep saying that I have many interesting projects in the pipelines,” he said.

“It is very exciting that Williams had confidence in Roy, and I can say I have confidence in Williams, absolutely iconic team that has had so much success in the sport.

“We are planning this as a long-term relationship. So no Formula 1 teams for me, I’m happy to be part of the Williams family.”

For her part, Claire Williams commented that Adams “seems an extraordinary individual. I know that he has very clear ambitions on what he wants for his country and what he wants to achieve, and you know the first step of that is bringing an Israeli driver into Formula 1.

“And that’s a very proud moment for us that we’ve helped him to realise that.”

There is the chance that holding a major event in Tel Aviv, shining a spotlight on the city and country, means this is the zenith for Adams: getting an Israeli into an official capacity at a Formula 1 team.

These are early days. Both Williams and Adams were keen to stress the nascent nature of the partnership while for Nissany himself the deal is unlikely to result in a 2021 F1 seat, given his limited results and Super Licence requirements (he needs a top three finish this year).

But for Williams, and potentially F1, it opens the door to a previously untapped market, and if this is indeed the start of a long-term partnership then Adams could be a name to keep an eye on judging by his previous ventures.