Button: ‘After today, I don’t expect points all season’

Jenson Button says he wouldn’t be surprised if McLaren-Honda fail to score points all season if the Spanish Grand Prix is anything to go by.

The Briton finished 16th with only the Manor drivers behind him.

Despite a positive start to the weekend which looked as though the team had turned a corner with its upgrade package, when it came to the race, Button described the MP4-30 as “scary to drive” due to unexpected wheel-spin when he applied the accelerator.

“On Friday the long runs were good, but it was pretty scary to drive,” he said on Sunday afternoon. “Every time I touched the throttle it just snapped. I’m sure there is something wrong there.

“The problem is in low speed corners it is slow because you accelerate and you get wheelspin immediately, but in high speed it is very scary as soon as you touch the power the rear end is gone, it snaps immediately.

“It is not a gradual snap like you normally get, it is very weird.”

Team-mate Fernando Alonso had been running in 12th for much of the race before brake failure saw him retire.

When Button was asked about McLaren’s potential this season following the Spanish GP weekend, he said: “After today I don’t think I expect points at all this year. Hopefully today was an off day, it didn’t feel right.

“The weekend has been reasonably good for us, I’ve been happy with how the car has been, but it was like flicking a switch in the race.” 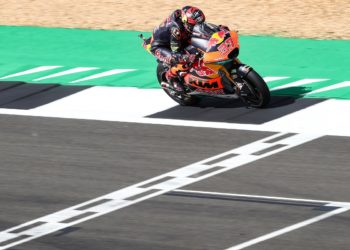