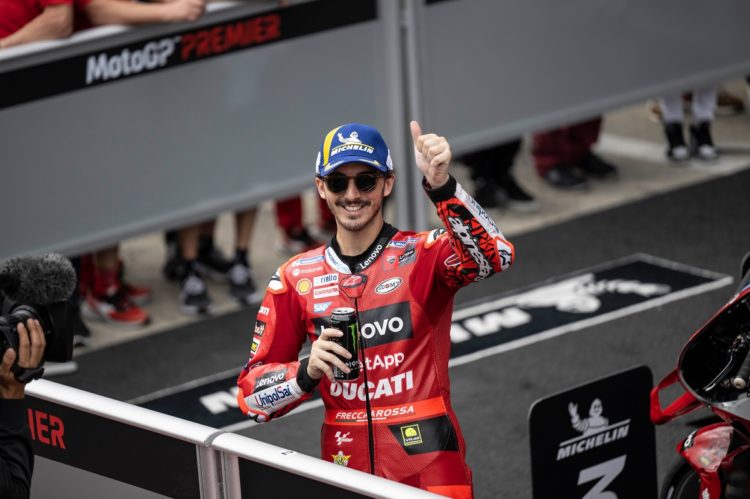 Francesco Bagnaia feels he is currently in the best form of his career so far thanks to a “transformed” mental approach brought about after crashing from the German Grand Prix.

Bagnaia notched up his third straight MotoGP victory – the first time Ducati has achieved the feat since Casey Stoner in 2008 – with an assured ride in the Austrian GP, narrowing his points deficit to Fabio Quartararo – who finished a close second to the Italian – to 44 with seven events remaining.

The 2021 vice-champion reckons he is currently in the “best moment” of his MotoGP career following his history-making success, explaining a change to his mindset after another of many unforced errors in June’s German GP – where he crashed from second while pushing Quartararo – has been the catalyst to his recent purple patch of form.

“I’m in my best moment for sure because since that critical moment (Germany crash) I have transformed my approach with my family and team, we made a step in this area but we need to keep going and see which area I next need to work on at the end of the year,” said Bagnaia.

“I’m looking forward to Misano because it’s always an incredible weekend being my home grand prix, but we’ll see what happens as I don’t want to put pressure on myself and just execute the weekend like we did this one, try and be smart and stay up front.”

Bagnaia added that he felt his Austrian success was his “hardest race of the year” due to suffering with his choice to use the soft-compound front tyre, admitting that he was struggling to stop his Desmosedici as a result of the reduced stability provided by the softer rubber.

“I tried to do the best start possible, and I also made a mistake with the gearing because I entered Turn 1 in third,” continued Bagnaia.

“Anyway I’m very happy with today because it was definitely the hardest race of the year, because I went for the safer choice of front tyre but in these conditions it wasn’t the best because I was expecting a slight drop of rain or temperature which didn’t happen, so the hard was maybe a bit better because I had a lot of trouble with front locking.

“When I saw Jack (Miller) overtake me I realised I had to go a bit faster, so I improved the pace and luckily this was enough.

“I was struggling at the start with the front tyre and losing time due my braking with the full fuel tank and soft tyre, but everything came good until the last two laps where I had no tyre and Fabio (Quartararo) was gaining a lot of time.

“I’m very happy and we did another great job this weekend.”