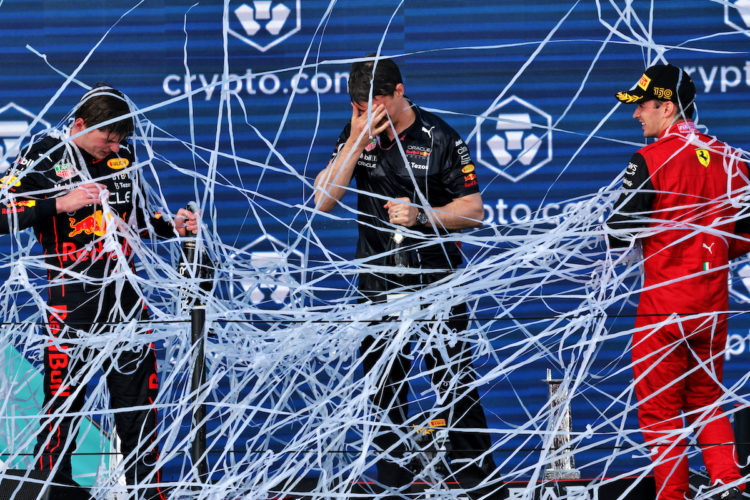 On Sunday, Red Bull took its third victory of the 2022 season in Miami to narrow the gap to Ferrari in both the Drivers’ and Constructors’ Championships.

The energy drink-backed squad looked to be the more comfortable of the two title-competing teams on Sunday afternoon in the United States, with Max Verstappen crossing the line in front of championship leader Charles Leclerc.

Verstappen was sailing comfortably out in front before a Safety Car was called in the closing stages of the grand prix following contact between Lando Norris and Pierre Gasly.

At the restart, Leclerc clung onto the back of Verstappen and challenged the Dutchman for several laps but was unable to make a pass, with Red Bull utilising its strong straight-line speed to stay in front.

However, there existed a chance for Ferrari to peel into the pit lane and equip fresh tyres, which could’ve allowed it to beat Verstappen to the top spot.

At first, the decision from Race Control was to deploy a Virtual Safety Car after Norris and Gasly tangled, before a full Safety Car was used. The call came right as Leclerc was rounding the final corner, giving Ferrari moments to react to the signal.

However, it decided to leave both Leclerc and Sainz out on track, while Sergio Perez pitted from fourth place. Red Bull Team Principal Christian Horner believes Ferrari staying out was a let-off for his team, as the Maranello-based squad gave up the chance to pit for fresh rubber and attack for the lead.

“Ferrari let us off the hook slightly when it went from a Virtual Safety Car to a full Safety Car, Max had already passed the pit entry, whereas Ferrari would’ve had a free stop,” Horner said.

“They didn’t take it with either of their cars. We’re grateful for that, because I think if they had put Soft tyres on, that would’ve been P3 [for Verstappen] today.”

Ferrari was of a different opinion however, with Team Principal Mattia Binotto stating that it was concerned over tyre warm-up – the team had no more fresh Soft tyres left in its arsenal to utilise at the restart, meaning its only viable option for untouched rubber was a set of Hards.

“The reason is that we believed that in terms of warm-up, a used tyre would have been stronger than a new one and that we would have suffered more warm-up issues on a new Hard which were the ones we had available in the garage,” he said.

“So we decided simply to stay out because we believed that was the best chance for us to have a good warm-up and try to attack on the first laps, which is what happened. I think that the best opportunity for Charles has been on the very first laps after the Safety Car. He didn’t overtake but certainly was close at that stage and for Carlos as well, on Checo with the new podium.”

Carlos Sainz clarified that he also wanted to retain track position over Perez, who was the only driver inside the top four to take on fresh tyres.

However, Perez was battling his own demons, having suffered from an engine issue earlier in the race which lost him several seconds to the cars in front. With new Mediums equipped, Perez struggled to make progress and botched an overtake attempt on Sainz, which forced him to settle for fourth.

Horner revealed that Perez was 20 kilowatts down in power after his issues earlier in the race, which cost him half a second in straight-line speed – likely denying Red Bull a second consecutive double-podium result.