Mir: ‘Hopefully we’ll be great in the next Misano race’ 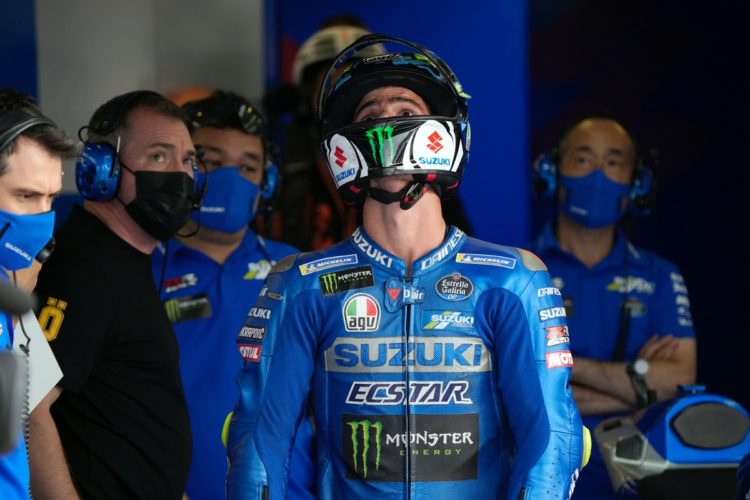 Joan Mir says he is optimistic about his chances in the second encounter at the Misano World Circuit next month after admitting Suzuki‘s tyre strategy was the “wrong choice.”

Mir and Suzuki once again struggled in qualifying after managing only 11th on the grid, though the reigning MotoGP world champion staged one of his customary Sunday race recoveries to put himself in a position to battle for fourth by the end of the San Marino Grand Prix as Marc Marquez got held up by the fading Ducati of Jack Miller.

Both Marquez and Mir managed to get the better of the Aussie on the final tour, the Spaniard coming just 0.080s away from denying Marquez for fourth on the run to the line-though he would ultimately be classified sixth after he was docked a position for exceeding track limits.

Mir says that his final-lap battle “was the only bit I enjoyed” after struggling to gain a good feeling with his GSX-RR after going against the grain and choosing the medium compound front tyre for the race, while the bulk of the rest of the field opted for the hard front rubber.

The one-time premier class race winner reckons though that his encouraging speed despite his lack of feeling with the medium front gives hope that a much better result could be possible in the Emilia Romagna GP at the end of October.

“The last part of the race was the only bit I enjoyed, the last lap,” said Mir.

“I was able to overtake Marc (Marquez) at Turn 2 and then I prepared to overtake Jack (Miller) because the Ducati is very difficult to pass.

“I made an on-the-limit overtake on Jack and then Marc overtook us again because we went wide, and then in the final sector it looks like I went a little bit wide so I respect the decision (docked one position.)

“The last part of the race was very difficult because we took the wrong choice to take the medium front because I was struggling a lot with the front of the bike and couldn’t ride it like I wanted, but I was fast so hopefully we’ll be great in the next Misano race.”

Suzuki also looks unlikely to retain the teams championship it scored last season-the organisation one of only two factories to have not won a race so far in 2021- as it trails leaders Yamaha by 94 points down in third in the standings, Ducati only a further three points behind the Japanese marque in second overall.