Sunday at Monza: The Great Gasly 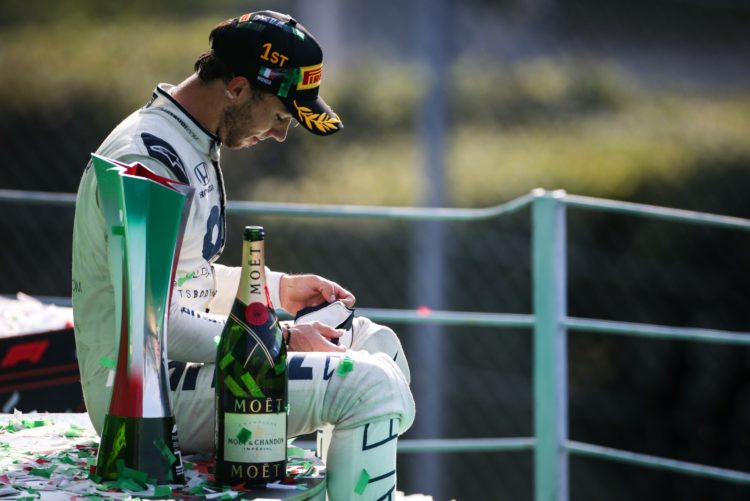 The 2020 Italian Grand Prix will go down in Formula 1 history as bonkers, unexpected, captivating, tense, and emotional.

And how did it happen?

And then all hell broke loose.

As the usual front-runners faltered it was up to the typical midfield starlets to do their best, and it was fitting that it was Pierre Gasly and Carlos Sainz that stole the show.

Sainz tried his best – and he pulled off a magnificent move on Kimi Raikkonen in his pursuit of victory – but Sunday belonged to Gasly.

This was a driver who took hit after hit and yet persevered to claim a prize that he so craved.

In 2013 he needed to win the Formula Renault Eurocup merely to continue his single-seater career, and he did, earning the backing of Red Bull.

In Formula Renault and then GP2 he couldn’t buy a win but he remained relentlessly optimistic that his day would come. He was always amiable, open, and receptive to a conversation.

Heading to the Silverstone GP2 round in 2016 he was involved in a serious road collision, leaving him with a back injury, and his mother in hospital.

He went on to finally end his win drought that weekend, acting as the springboard for a championship run. But F1 did not beckon. Toro Rosso kept Dany Kvyat for 2017.

Gasly stayed focused and when Red Bull sent him to Japan he was open to a new culture, a new way of learning, and he was on course for the title until a typhoon cancelled the season finale.

By that time Formula 1 had already beckoned and through 2018 he dug deep in the first year of the Toro Rosso-Honda partnership, excelling with fourth in Bahrain and sixth in Hungary.

When Daniel Ricciardo upped sticks and departed for Renault it left Red Bull in a quandary. Carlos Sainz was already on the brink of moving to McLaren and thus Gasly was the obvious choice. Red Bull acknowledged that Gasly was moving up earlier than expected and promised to give him time.

But the marriage was beset by problems from the outset and the bubbly Gasly was replaced by a figure who looked ill at ease in his environment. He was struggling, of that there is no doubt, but there was still shock when he was demoted to Toro Rosso.

He re-appeared in Belgium and did not bad mouth the team – while hinting at a few troubles – and kept his head down, vowing to rebuild with Toro Rosso.

Then a few days later one of his closest friends, Anthoine Hubert, was killed in a horrific Formula 2 accident.

Since Gasly returned to Toro Rosso/AlphaTauri he has been one of the midfield’s standout performers. The Brazil podium was the high point but there were superb drives elsewhere – seventh in Japan, ninth in Mexico, seventh in this year’s Austrian opener, eighth in Belgium just last week.

Even recently there was another galling setback, as his house in Normandy was broken into, with Gasly losing some cherished personal items.

No-one could have seen the Monza result coming. It would have taken the Mercedes, Red Bulls, probably a Racing Point and the McLarens all to slip-up or be out of position.

Yet that is exactly what happened – and Gasly did not put a wheel wrong for the 26 laps he found himself up front, even as Sainz closed the gap. There was fortune involved, certainly, but it was a deserved victory for a driver who, still only 24 years old, has had a rollercoaster career.

“I managed to pass Lance [Stroll] into Turn 1 and I think this really helped me for the rest of the race,” he said.

“Lewis pitted I think on lap one and after that I was on my own, just reminding me of my Formula 2 days, just leading the race and focusing on your own driving, corner-by-corner.

“I pushed so hard at the start because I wanted to break the tow to the guys behind. I didn’t have anyone in front of me so I knew I had to make the time in the corners. The last five laps were really hard because my tyres were completely gone, I was sideways in every corner, I could see Carlos slowly closing the gap. I know myself, I would have been so pissed about myself if I lost the win in the last few laps. I gave everything I had and I’m so happy I managed to get my first race win in F1.”

It was only the second time in Formula 1 history that AlphaTauri, previously Toro Rosso and Minardi, claimed a win, and the first in dry conditions. Their prior win came with Sebastian Vettel, also at Monza, in 2008.

“Personally I know how important it was for me to get my first race win in Formula 1,” he said.

“In the end, it’s only my third season in F1, even though I’ve been through a lot I still feel I’m quite new to this world and I’m improving year after year and getting better the whole time. I would never have expected that a year ago when I got back to Toro Rosso. The podium was already unexpected. I wasn’t ready for that win today. You always try to imagine the best scenario, the best start, the best race, everything the best way. It happened only once in the whole history of Formula 1.

“Franz [Tost] also told me ‘We’ve done it on the wet, I’m really proud of you because today we’ve done it on the dry now’. It was very difficult but I’m just happy to show my speed. I’ve worked on myself day-after-day, race-after-race since last year, trying to get stronger all the time. I’m really happy today I get the reward of all the hard work we’ve done with AlphaTauri and Honda.”

There were words of praise from World Champion Lewis Hamilton, who regularly plays video games online with a group of racers, including Gasly.

“I think to then build the confidence up in not necessarily as quick a team, and build the confidence up, and to come around with some really great performances he’s had this year already, and then to get himself a win, I think it’s not easy to do that. Really impressed. I think he’s done a fantastic job, and deserves the success and hopefully that creates an opportunity for him moving forwards.”

When the ceremony finished Gasly sat down on the top step of the podium, almost zoned out, taking in the experience.

“I had a lot of things crossing my mind,” he said.

“It was a very special moment. It’s been a crazy ride in the last few months, it’s just unbelievable.”

Unbelievable it may be. But it happened. Pierre Gasly: Formula 1 race winner.