‘Bouncing is back’ at Mercedes, claims Hamilton 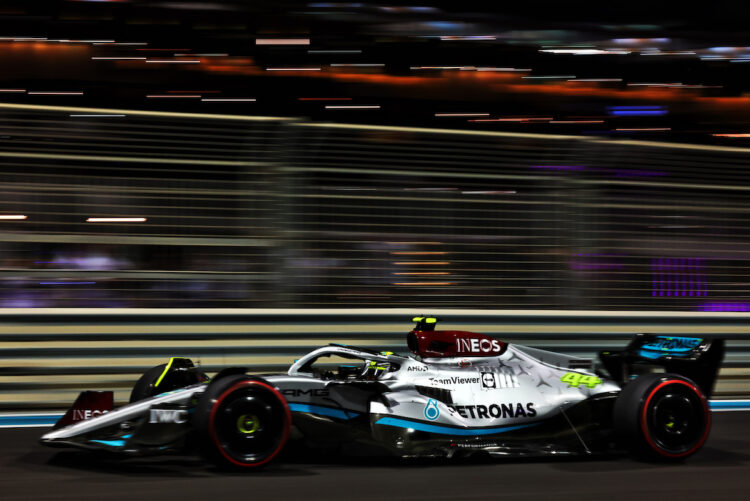 Lewis Hamilton says that Mercedes’ bouncing issues that plagued the early stages of its 2022 season have returned in Abu Dhabi.

Hamilton endured a difficult session at the Yas Marina Circuit, ending Q3 in fifth place ahead of team-mate George Russell.

Max Verstappen and Red Bull took pole position, holding an advantage of almost seven-tenths of a second on the Mercedes team that took victory in Brazil last weekend.

Hamilton was confident after Friday practice that its pace in Abu Dhabi would allow it to be competitive – however it was completely out of the pole fight picture on Saturday.

“We thought that this would be a difficult race for us but we weren’t expecting it through the weekend so far,” Hamilton told Sky Sports.

“We weren’t looking like we were eight-tenths out so a bit of a surprising qualifying to be so far behind.

“Six-tenths of that is just on the straights. Otherwise, I gave it everything. I’m looking forward to the end of tomorrow.”

Hamilton claims that the W13’s aggressive bouncing on the track surface has returned, despite it not being an issue at recent rounds.

Mercedes spent much of the opening part of the 2022 season attempting to understand its car, which was unable to compete with rivals Red Bull and Ferrari due to porpoising.

Hamilton says that he also suffered from brake problems during qualifying, which contributed to his drop-off in pace.

“Bouncing is back with a vengeance,” he said. “Bouncing is back and that’s definitely losing us time. Otherwise, we are just so slow on the straight. I had some brake problems, we’ve had it most of the year.

“The brake discs separate and brake temperature so when you hit the brake the car pulls in one direction. If you’re going into Turn 5, it’s pulling to the right and it’s a left-hand corner. It’s not ideal.”