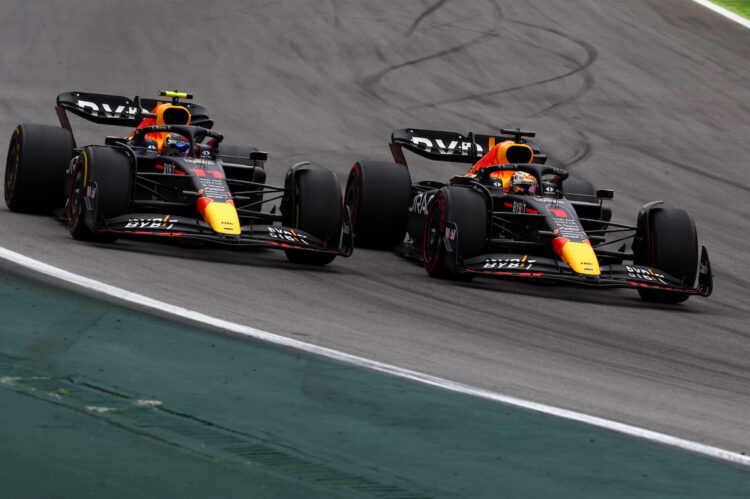 Verstappen came under scrutiny on Sunday in Brazil, after he defied a team order and didn’t allow Perez to pass him for sixth place on the final lap, after Perez had let him through several laps prior.

Perez was frustrated after taking the chequered flag, exclaiming ‘it shows who he really is’ over the team radio.

Entering the final round from Abu Dhabi, Perez is currently tied with Ferrari’s Charles Leclerc on 290 points, with Leclerc ahead on account of scoring more race wins this year.

Horner says that Perez finishing second in standings is a “priority” for Red Bull, and that Verstappen will assist his team-mate this weekend.

“We discuss these things internally, the drivers have spoken about it as well,” Horner told Sky F1. “They’re very, very clear.

“For us, Checo is now tied on points with Charles, Ferrari didn’t switch their cars around.

“We go into Abu Dhabi as a team to do the very best we can for Checo to achieve that second place. Max will fully support that.”

Verstappen came under fire for his role in the team order debacle, with some suggesting that he believes himself to be bigger than the Red Bull Racing operation.

But Horner denied that it is the case: “We work as a team, we race as a team.

“Our objective and priority is to get to see if we can get Checo to finish runner-up in the championship. It’s something we’ve never achieved as a team before.

“Max is giving it his commitment as well that we will be doing the best we can in Abu Dhabi as well to achieve that. It’s a straight fight between Checo and Charles. If Max can help in any way, he will do.

“Checo has done a phenomenal job all year and he deserves that second place. As a team, we will do our very best to support that and achieve it in Abu Dhabi.”