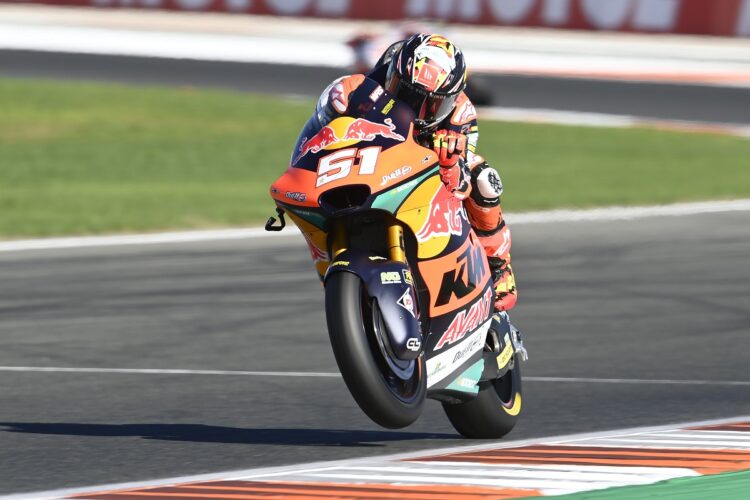 Acosta got away well to hold his second-place starting spot behind pole-man Alonso Lopez, though soon began to attack for the leadership.

His path to victory was made trickier though after Lopez ran his countryman wide at Turn 2, dropping the duo to third behind Tony Arbolino and Ai Ogura.

Lopez’s victory threat would ultimately come to an end shortly after though after crashing at Turn 8 just a few laps into the encounter while running fourth, allowing Acosta to focus ahead on Ogura.

His job was made easier as the Honda Team Asia man crashed out at Turn 8 not long after while pushing to try and catch the leading Arbolino in order to try and snatch away the title from the Fernandez, his spill granting the Spaniard the championship on the spot.

Acosta meanwhile swiftly made use of his newly-found clean track to chase down and rip away the lead from Arbolino’s grasp, with Fernandez soon following his team-mate through not long afterwards.

Fernandez kept the pressure on his rookie fellow Ajo rider across the rest of the contest, though Acosta held firm and ended up taking the chequered flag by 1.2 seconds ahead of Fernandez, who wrapped up his maiden grand prix world title by 25.5 points over Ogura in the end.

Arbolino completed the rostrum in third meanwhile, his final laps made all the more easier as the pursuing Aron Canet crashed out, which gifted the sole remaining Speed Up machine of Fermin Aldeguer to claim fourth ahead of GasGas rider Albert Arenas.

Manuel Gonzalez moved up through the field to finish sixth from 14th on the grid as did Jake Dixon, the Briton bagging seventh from 15th at the start having also dropped as low as 23rd due to a sluggish start.

Jeremy Alcoba was eighth for Intact GP despite picking up a late long-lap penalty for taking out Aspar wildcard rider Mattia Pasini with a clumsy move at Turn 4, while Senna Agius impressed for Marc VDS to take ninth ahead of the sister Intact entry of Marcel Schrotter.

The attrition-filled encounter also saw Celestino Vietti suffer a third successive crash to bring his rotten second half of the year to an equally-miserable end, while Honda team Asia’s day failed to improve after Somkiat Chantra crashed in exactly the same way as team-mate Ogura at Turn 8 while running sixth.

Cameron Beaubier also fell victim to the seemingly-magnetic Circuit Ricardo Tormo gravel traps in his final Moto2 event, the American Racing rider going down at the final bend early while challenging for a podium position.