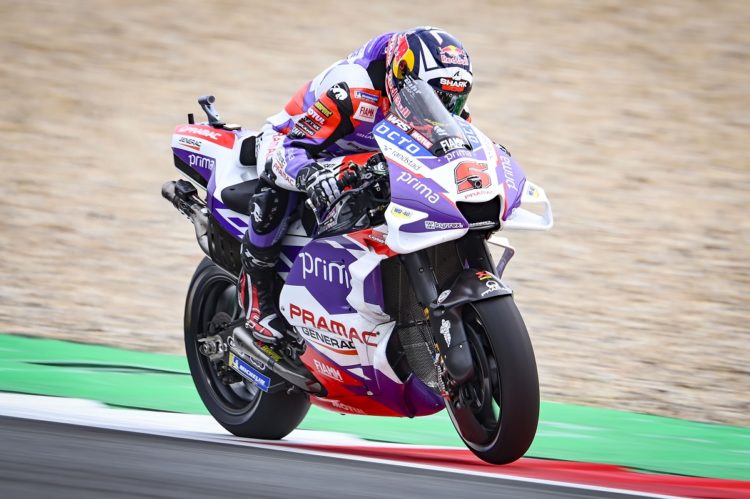 Johann Zarco came out the blocks fastest after the MotoGP summer break by topping the opening free practice session for the British Grand Prix at Silverstone.

The Pramac Ducati rider spent much of the session not chasing out-right laptime as the likes of Suzuki’s Alex Rins and Aprilia’s Maverick Vinales took turns at the top, though Zarco elected –following an earlier crash at Turn 7 – to don a fresh set of rubber in the closing minutes to try and post a leading effort.

A mighty second half of the Silverstone circuit saw him fire in a 1:59.893s, the first sub 2:00 time of the weekend that was enough to secure him FP1 honours ahead of fellow Desmosedici man Francesco Bagnaia, who was the only other rider to lap in the 1:59’s just 0.027s adrift despite an early crash.

The factory Ducati ace lost the front of his machine at the fast Turn 4 and slid off into the gravel, facilitating a return to the pits on a scooter to retrieve his spare bike.

Third went the way of Rins ahead of series leader Fabio Quartararo, while Takaaki Nakagami completed the top five on his LCR Honda.

Aprilia duo Aleix Espargaro and Vinales ended up sixth and seventh respectively ahead of the second Suzuki GSX-RR of Joan Mir, while Jorge Martin posted a last-gasp gambit to go ninth just ahead of Brad Binder on the fastest of the KTM’s.

Marco Bezzecchi was fastest rookie in 13th overall on his VR46-run Ducati, the Italian just slotting in ahead of the second factory KTM of Miguel Oliveira and just behind Jack Miller.

Enea Bastinaini was only 16th on the first of the Gresini Ducati’s, while the soon-to-be-retiring Andrea Dovizioso continued to suffer for speed on his RNF Yamaha down in 20th, slotting in just ahead of countryman Franco Morbidelli on the sister factory M1.