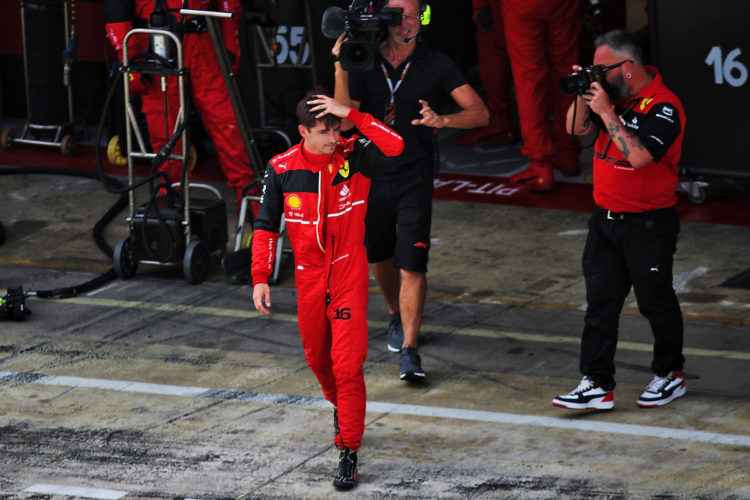 Charles Leclerc asserts he is focusing on the positives from the Spanish Grand Prix weekend after missing out on victory in Barcelona.

The Ferrari driver was comfortably leading the race, before a mechanical issue forced him back into the pit lane.

Leclerc was on course for his third win of the season, which would’ve extended his lead at the top of the Drivers’ Championship.

Instead, rival Max Verstappen won the race and took over atop of the standings, holding a six point lead ahead of this weekend’s Monaco Grand Prix.

Despite the disappointing result in Spain, Leclerc says that he feels better after the weekend compared to previous rounds this year.

“Let’s say that I feel better after this weekend than after the last two weekends,” he said.

“Of course there is this issue on the car and I am very disappointed, but on the other hand I think there are plenty of positive signs throughout the whole weekend.

“Our qualifying pace, the new package worked as expected, which is not always a given, and everything was working well with our race pace and tyre management.

“On tyre management at the last two races we have been struggling quite a bit compared to Red Bull and today it was strong.

“So in those situations I think it is good to also look at the positives and there are plenty today.”

After he climbed out of the car following his return to the garage, Leclerc was seen shaking hands with the Ferrari mechanics.

The 24-year-old stated that there was no reason to be angry over the situation, as his colleagues were just as disappointed over the DNF as he was.

“It’s always a disappointment and when you are fighting for a championship you know that all the points are very valuable,” he said.

“Over the course of the season it always more or less happens. That’s not an excuse, for sure, and I’m sure everyone is already working flatout to understand it and fix it as soon as possible.

“Everyone is as disappointed with me today with what happened, but there is no reason for me to be angry with anybody when I got out the car.

“I just went to see the mechanics to cheer them up because they were pretty down.”