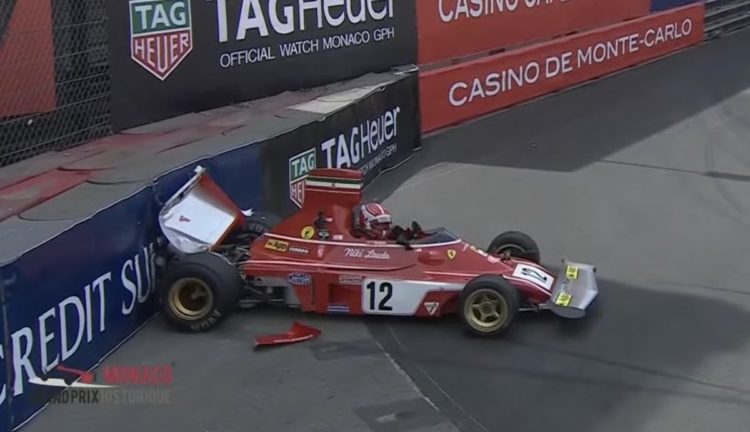 Charles Leclerc’s Monaco curse continued with a demo run on Sunday during the 2022 Monaco Historic event, in which he crashed a historic Ferrari Formula 1 car.

The current F1 points leader was driving Niki Lauda’s 1974 Ferrari 312B3 around the street circuit, but on the third lap, the Monaco resident lost the rear entering the La Rascasse corner and spun into the barriers.

The rear-wing of the 312B3 was dislodged, but Leclerc was able to get going again and came to a stop on the start/finish straight with smoke coming from the rear of the car.

“I was lucky to have it at that moment, because if I had had it at another place, it was no good… the problem is that I got scared. I arrived normally in the corner.”

Writing on social media, Leclerc commented on his run of bad luck on the Monaco streets: “When you thought you already had all the bad luck of the world in Monaco and you lose the brakes into rascasse with one of the most iconic historical Ferrari Formula 1 car.”

Leclerc has never scored in Monaco and in 2021 it looked as though his curse had come to an end when he secured pole position, but the 24-year-old crashed on his final qualifying lap, causing gearbox damage which meant he couldn’t start the race.