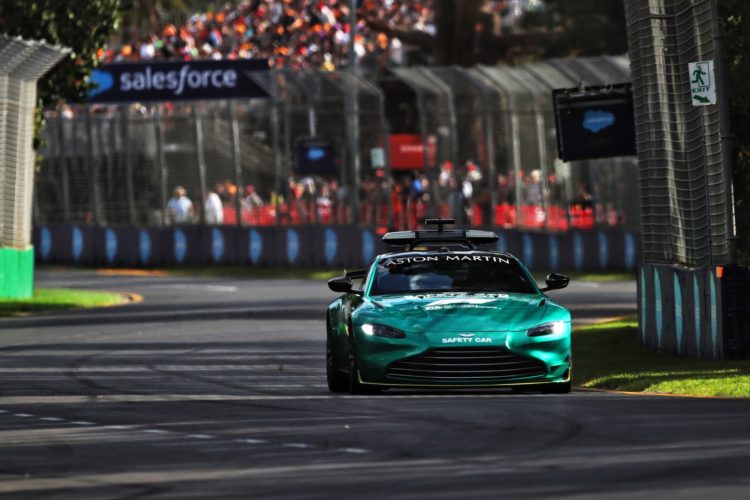 World Champion Max Verstappen says Formula 1 needs to take a look at Aston Martin’s Safety Car after describing it as “like a turtle” due to its speed.

Formula 1 has had a long-term relationship with Mercedes over the supply of the Safety Car but last season a joint partnership was agreed that involved Aston Martin.

Aston Martin’s Safety Car made its first appearance of the campaign in Australia and was used in the race following separate terminal incidents for Carlos Sainz and Sebastian Vettel.

At the second restart leader Charles Leclerc slid through the final corner, allowing Verstappen a run, though ultimately their respective positions were maintained.

Speaking after his retirement Verstappen said: “The Safety Car was driving so slow, it was like a turtle. Unbelievable. With that car, to drive 140 on the back straight, where there’s not a damaged car anymore, I don’t understand why we have to drive so slow.

“We have to investigate. For sure, the Mercedes Safety Car is faster because of the extra aero, the Aston Martin is really slow. It definitely needs more grip because our tyres were stone cold.

“We went into the last corner, I could see Charles understeering. So I’m like ‘OK, I’ll back off a bit more’ and I had a better line. It’s pretty terrible, the way we’re driving behind the Safety Car at the moment.”

Race winner Leclerc conceded he “wanted to complain but then I checked how much the Safety Car was sliding in the corner, and I don’t think there was anything more that he could give.”

Mercedes’ George Russell, who finished second, quipped: “We don’t have the issue with the Mercedes AMG Safety Car.

“On a serious note the Mercedes AMG is like five seconds a lot quicker than the Aston Martin Safety Car, which is pretty substantial.”