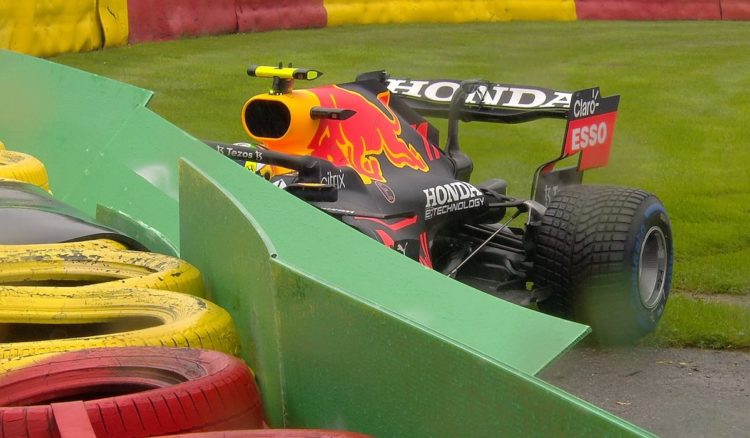 Sergio Perez will not be involved in the Belgian Grand Prix after the Mexican crashed on his way to the grid on Sunday at the Spa-Francorchamps circuit.

With rain heavily saturating the circuit all morning, Perez lost control of his car at low speed at the Les Combes corner and collided with the barrier.

Perez was set to start the race from seventh on the grid, with team-mate Max Verstappen leading the pack from pole position.

After the shunt with the barrier, Perez was told: “That’s us done, Checo. Cut the engine.”

Red Bull’s prospects at Spa now entirely rest with Verstappen, as the energy drink-backed outfit looks to reclaim the lead in both championships after a difficult duo of races at Silverstone and Budapest.

Team boss Christian Horner added: “Obviously very disappointed not to take the start, just shows how tricky the conditions are. He complained about visibility and the car just got away from him. A great shame.”

The result means that Perez has not scored points in three consecutive races, as he was 16th at Silverstone before retiring on the opening lap of the Hungarian Grand Prix earlier this month.

With Perez out, no drivers will move up on the grid order for the start of the race – instead, the seventh position on the fourth row will be left vacant.

[Update] Due to the delayed race start because of poor weather conditions, Perez has been given permission to rejoin the race, starting from the pit lane.