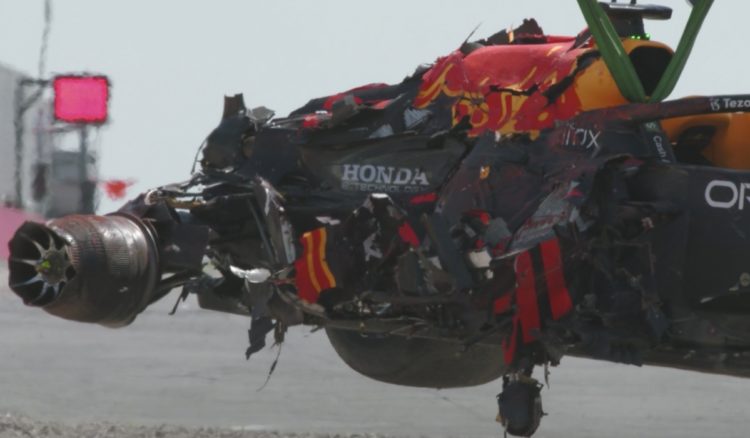 Max Verstappen came under pressure from Hamilton into the Copse corner, with the Briton diving down the inside before his front-wing made contact with Verstappen’s rear-tyre, pitching the Dutchman into a spin.

Verstappen then collided heavily with the tyre barrier with a 51G impact, heavily winding him and ending his race on the sport. A red flag was required to recover his car and to repair the tyre wall.

Horner was clearly unhappy with the clash and vented his anger at the FIA’s Michael Masi over team radio.

“That corner, he was never anywhere near alongside,” Horner told Masi. “Every driver who has driven this circuit knows that you don’t stick a wheel up in the inside at Copse. That is an enormous accident.

“It was 100 per cent Max’s corner. So, you know, as far as I’m concerned, full blame lays on Hamilton who should never have been in that position.

“You could have had a massive accident. Thank God he’s walked away unscathed. So, I hope you’re going to deal with it appropriately.”

Speaking to Channel 4 during the red flag stoppage, Horner described the move as “dirty driving”.

“I think it was a desperate move,” added Horner. “He failed to make the move in the first part of the lap, which he was obviously geared to do, and then it was just a desperate move sticking a wheel up the inside which you just don’t do.

“You boys know as well as anyone, Copse is one of the fastest corners in the world. You don’t stick a wheel up the inside. That’s just dirty driving.”

Hamilton was handed a ten-second time penalty for the collision.