Why McLaren is content despite losing to Ferrari in Spain 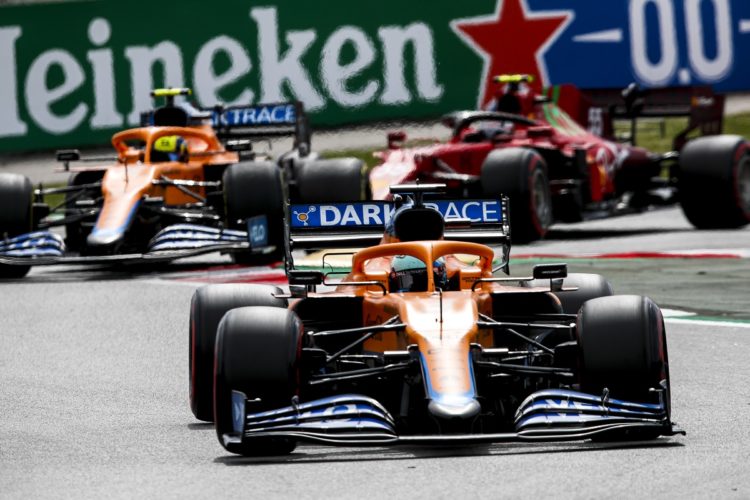 The battle for third in the Constructors’ Championship raged on at the Circuit de Barcelona-Catalunya, as McLaren and Ferrari were once more embroiled in their own fight.

It was Ferrari who reigned supreme in the scuffle when the chequered flag fell at the end of 66 laps of the Spanish Grand Prix – Charles Leclerc led the related quartet of drivers in fourth place, with team-mate Carlos Sainz in seventh.

McLaren’s Daniel Ricciardo was sixth, while Lando Norris was eighth – his lowest result to date in the 2021 campaign.

The weekend in Spain marked the first time this season that Ferrari walked away from a race with more points than McLaren, as it closed the gap in the third place battle to five points.

However, McLaren refused to become downbeat despite accepting defeat to the Scuderia outfit in Barcelona, insisting that focusing on improving Saturday’s qualifying pace will help it in the long run to score more points in the grand prix, when overtaking becomes especially difficult.

“I think if you look at this race weekend, I think we simply have to accept that Ferrari was strong in the race,” said McLaren Team Principal Andreas Seidl. “But if you look at the whole season, I think it is clear, we need to try to finish higher up on Saturdays.

“Because in the end, it makes your life on Sunday so much easier if you, for example, do your stints in free air without pressure behind, which we managed in some races already this year because of having a good start or a good first lap.”

So far, ensuring a higher starting position to achieve a strong result in the race hasn’t been smooth sailing for McLaren. Ferrari’s Leclerc has an average qualifying position of fifth to start the 2021 season, with Sainz and Norris both having an average of 7.5. Daniel’s Ricciardo average is 8.5, his count badly hampered by his Q1 exit at Portimao.

However, Seidl outlined that McLaren is firmly focusing on that low-fuel, high-pressure area to obtain track position early in the grand prix and have enough pace in the car in race trim to see the result through to the chequered flag.

“We want to finish higher up on Saturdays in the end you want to finish on Saturday where the potential of the car is. That’s a lot of different factors obviously have to come together to manage this. Some stuff is under your control some things not. But that’s a clear goal in order to make sure we have easier Sundays.

“I’m happy with the [Barcelona] race. I think it was good to see, in terms of execution of the race from the team side in terms of strategy in terms of pitstops that we had a good race. So thanks to all the work from the guys.

Encouragingly for McLaren, Ricciardo appeared to enjoy his smoothest weekend to date with the team, as he continues to warm into his new environment. In the final stages of the grand prix, he managed to hold off Sainz, which Norris couldn’t do.

“With my race and how the team executed it I am happy,” Ricciardo reflected. “I do not think that in any other scenario we would get better than sixth.

“The car as it finished ahead of us were quicker and we kept a quicker car behind us with Carlos. It was important to get him off the start. It was good, but we still obviously have to work. Ferrari certainly had more pace than us here, so overall we want to do better. But I’m happy with the outcome of the race.”

Of Ricciardo’s steady growth within the team, Seidl said: “I wouldn’t say that is a surprise how he approached these challenging first races with us. I think also on the team side everyone who was involved in this integration process engineering side or the garage side did a great job. In order to stay also calm.

“I will say we are not there yet where we want to be, where Daniel wants to be but as I said many times I’m 100% convinced it’s just a matter of more races now doing together with us and then we will see performance as we are used to from Daniel.”