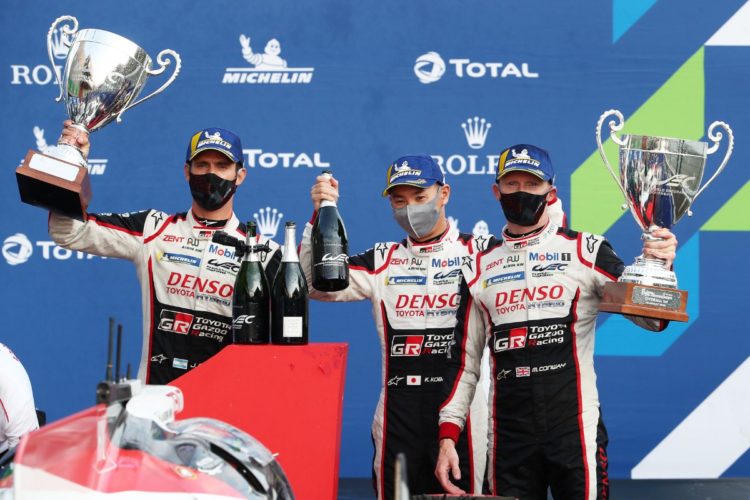 Kamui Kobayashi thinks avoiding trouble and keeping the car on track was the most difficult part of the Toyota’s victory in the Total Six Hours of Spa-Francorchamps.

Kobayashi, Mike Conway and Jose Maria Lopez took their first win as a driver pairing in the Belgian six-hour enduro in a race that was disrupted by rain showers on several occasions, including a safety car start for heavy rain prior to the race.

“I think our most difficult part was to stay on the track without any accident,” Kobayashi said. “Especially when you’re behind some car, you can’t see anything from the spray.

And at the same time, when you get more showers, you’re basically aquaplaning around on the track.”

The #7 Toyota TS050 Hybrid took its third win of the season, beating out the sister #8 Toyota of Sebastien Buemi, Brendon Hartley and Kazuki Nakajima after it ran into trouble with mechanical issues and lost the lead after a poorly timed switch to slicks.

“It was really difficult to stay on the track, but we were still fighting with car 8,” Kobayashi continued. “They were pretty fast so I needed to push, but at the same time I needed to survive and have that conscience somehow.

Kobayashi’s team-mate, Mike Conway, admitted that the win was unexpected given the hefty Success Handicap thechampionship leading car had received prior to the race, stating he was looking at a likely third place finish.

“Not easy conditions at all today, with the rain, drying, rain. I guess we’re used to this now at Spa, but to come back after the long break and get the win… quite unexpected, I have to say,” Conway remarked.

“With the penalties and stuff we have, we just thought we were going to finish third here this weekend, maybe second if things mixed it up, but it’s been a great day.”

“At the beginning, very wet, Seb [Buemi] was very quick, it was hard to keep up with him. We seemed to manage the gap. They had some issues as well with their car at that moment.

“So we caught the gap up, and after that it was the right call to go on the slicks when we did, and then we managed to extend a big gap. But it kept changing throughout the race with the safety cars, so really challenging all the time.

Car 8 was very quick in sector one and three with the extra boost they had, but we managed to pull it together,got the car really dialed in. The engineers did a great job overnight, they changed some things and it really worked out well today some big congratulations to them and my team-mates.”